South Africa’s top athletes will get another shot at joining the Olympic squad at the national student championships hosted by the University of Johannesburg this weekend.

A record number of almost 700 athletes from 21 tertiary institutions will be participating in the annual University Sport South Africa (USSA) Track and Field Championships at the Kingsway Campus in Westdene on Friday and Saturday.

UJ athletics manager Thabiso Moletsane said it was a great honour to host the event in an Olympic year.

He said it was also a fantastic opportunity for participants to enjoy the one-of-a-kind blue tartan track – one of just three IAAF-registered tracks in South Africa.

“It’s actually the fastest track in the country at the moment, so we’re expecting some good performances.”

Moletsane said the new layout of the stadium would ensure a smooth-flowing programme and all the technical advantages possible.

“For example, we have four long jump, triple jump and pole-vault run-ups that take the effect of the prevailing winds into account.”

According to him, there were a number of student athletes who were very close to attaining the Olympic standard.

Long jumper Zarck Visser (UJ) made the grade at the national championships in Port Elizabeth two weeks ago but strong winds meant his 8.21m distance could not be officially recorded.

In the 400m hurdles, Wenda Theron (Tuks) will be chasing the elusive 55.40 second qualifying time, after clocking her personal best (55.79) at the same meet.

Runner Rorisang Ramonnye (NW-Pukke), who came within two hundredths of a second of the required 400m time (51.50), will also be one to watch.

Other hopefuls include pole-vaulter Cheyne Rahme, shotputter Jaco Engelbrecht  and 3000m steeple-chaser Tumelo Motlagale, who will all have home-ground advantage.

To be eligible for the London Olympic Games in August, athletes must achieve A-standard qualifying marks at least once nationally and internationally before June 30.

The USSA championships will be the penultimate opportunity to qualify nationally for the Games.

Their last opportunity on local soil will be the South African Open Championships that takes place in Pretoria next weekend. After that, the African champs in Porto Novo, Benin, on June 27 will present the final chance. 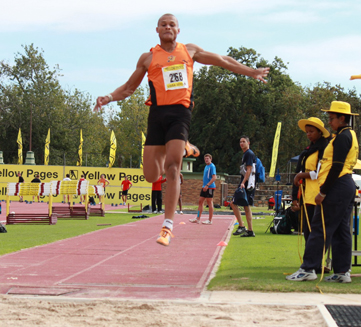 UJ long jumper Zarck Visser will be among the Olympic hopefuls in action at the USSA Track and Field Championships at the UJ Stadium on the Kingsway Campus this weekend. Photo: Supplied