She takes over from Elize Kotze, who has accepted a temporary contract with the SPAR Protea side until after their tour to Jamaica in June.

“It’s just right for me,” said the mother of three who divides her time between the family’s Klipplaat farm and Port Elizabeth. “It’s not as hectic as coaching the national squad but you still get to work with top players.”

A veteran of two World Cups and 82 tests, Krige will prepare the Fastnet squad for the World Netball Series tournament in Auckland, New Zealand, at the end of the year.

The fast-paced format was developed specifically for this series in 2008 and features six-minute quarters as opposed to the traditional fifteen.

Krige likened the game to the T20 version of cricket. “Normal netball rules apply but it’s shorter, with fewer stoppages and much more exciting.”

Although the players are generally drawn from the existing national squad, she said Fastnet’s use of rolling substitutions allowed coaches to blood more players at international level.

Krige, who is also the assistant coach for the national student team, said Sascoc had first approached her earlier this year regarding a number of vacancies.

“I initially applied for the U/19 assistant coach job, so when I heard I’d been shortlisted for this position I was very surprised.”

She received the confirmation of her appointment following a stringent interview process in Johannesburg in April.

“I do feel it makes a difference when you’ve been on court,” said Krige. “I’m not saying you have to be a fantastic player to be a great coach – I mean, look at Jake White – but I feel it does help in certain situations.”

She said she was looking forward to taking up a strategic role and selecting the right combinations of players.

Krige said the new national squad would be selected after the national championships in August and that she would be attending some of their training camps to see how the members were shaping.

The 40-year-old will know what to look for, having come through the ranks, first as goal defence for the Boland provincial side and later as a member of the national U/21 squad before graduating to the senior team.

She played for the Proteas from 1995 until 1999 when she took a four-year break to start a family and began coaching the NMMU team.

In 2003, when the Proteas were having difficulties in the lead-up to the World Cup, Krige was one of six players invited to take part in the trials and was once again co-opted into the national team.

She formally retired from playing in 2004. 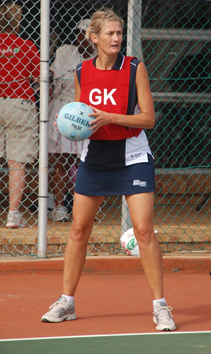