What started with a trip to Pier 14 Shopping Centre for a new kitchen unit ended with much more than one lucky shopper bargained for when he won a complete kitchen worth R20 000.

Luyanda Dlanga of Motherwell NU8 in Port Elizabeth beat out 10 other finalists when his name was drawn in the recent “Make Mothers’ Day Memorable” promotion at the centre.

“I really needed a new one, so I’m more than happy,” said the self-employed father of two, who makes security gates and burglar bars.

The lucky winner took home a fully equipped kitchen, consisting of a large cupboard unit plus table and chairs, a two-plate stove, microwave oven, fridge, washing machine and tumble drier. The prize also included assorted kitchen accessories along with a kettle and toaster.

Dlanga said he surprised his 30-year-old wife, Tuliswa, with the truckload of items for Mothers’ Day.

“The first time she heard about the kitchen was when it was delivered. She just started screaming when she saw it.”

The 41-year-old said he had originally gone to Pier 14 to do some window-shopping and lay-buy a new kitchen unit.

“I saw the display and the security guard said it wasn’t for sale. He told me about the promotion and said that I should send an SMS to the competition line to enter.

According to Sophia Steyn of Pier 14 centre management, Mothers’ Day was one of the major “days to remember” on their promotional calendar.

Steyn said adult females formed the bulk of Pier 14’s shopper demographic and the centre was pleased to be able to reward a loyal customer through this competition.

“It was the first time that we have run a bilingual (English and Xhosa) promotional campaign. It talked to our entire target market and was very well received.” 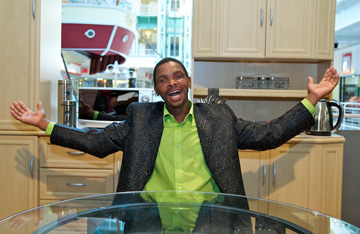