Port Elizabeth’s beachfront was a sea of orange as a record 12 200 runners set off in the 19th annual SPAR Women’s Challenge from King’s Beach on Saturday morning.

While most of the participants – ranging in ages from nine to 90 – took to the streets in the name of fun and charity, there was also some serious racing at the head of affairs in the Eastern Cape’s biggest road race.

Rene Kalmer, who will be representing South Africa in the marathon at the Olympic Games in London this year, clinched the 10km title while 13-year-old Simone Weitz, from Johannesburg, took home the 5km crown.

“I enjoy this race very much. I ran the 10km three years ago, but only because I arrived too late for the 5km.”

Adding to the festive atmosphere was the throng of male participants in the 5km, all in varying degrees of drag.

Tights, skirt and pink halo was 27-year-old former national hockey player Paul Blake’s outfit of choice as he participated for the first time after being dared to enter through his charity fundraising campaign Dare the Donga.

“I was dared R200 to run in drag. The weather was beautiful and I loved it.”

The main event, the second in SPAR’s five-race national Grand Prix series, was more serious with two Olympic marathon qualifiers in Kalmer and team-mate Irvette van Blerk getting off to a fast start.

Kalmer, racing in the colours of Nedbank Running Club Central Gauteng, built up an early lead, which she maintained throughout to win comfortably in 33:30.

Zintle Xiniwe, from Mr Price Western Province, was runner-up in 34.01 with Van Blerk completing the podium in 34.15.

Having picked up a hamstring niggle while training, Kalmer called her win “a miracle”. “I haven’t been able to train all week, and even thought of pulling out.”

Van Blerk, who is coming down with flu, said she had “tired legs”. “It wasn’t one of my greatest races, but I’m happy with third.”

While Kalmer always loves running in the Friendly City, Van Blerk is still getting to grips with the wind, which had picked up during the 10km.

“The first half was fine; the wind was from the back. But the long straight (into the wind) felt like it was never going to end.”

Xiniwe said she was happy with her second after finishing fourth at the first SPAR Grand Prix race in Cape Town last month.

SPAR Eastern Cape marketing director Martin Webber was thrilled with the record number of participants – 500 up from last year. “We are raising the image of the event each year.”

He praised the efforts of Walmer Athletics Club, which has organised the race since its inception in 1993.

With the money raised from the race, Spar Eastern Cape donated R50 000 apiece to the Yokhuselo Haven, which provides safety and shelter for abused women and their children, and the Association for the Physically Disabled.

“With your help, we can give back to the community we come out of,” Webber told the huge crowd.

As the high school with the most entries, Lawson Brown received a Core Technologies laptop.

Lorraine Primary School and St George’s Hospital each received R2 500 as the primary school and company with the most participants.

The winner of a year’s worth of SPAR groceries, worth R18 000, was Zenobia van Staden. 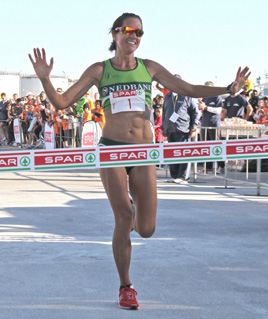