John-Lee Augustyn, one of South Africa’s foremost cycling exports, has returned home to share the benefit of his extensive international experience with the Port Elizabeth cycling fraternity while he recovers from a lingering hip injury.

The 25-year-old is one of only two South African cyclists to have participated in all three European grand tours – the Tour of Spain, Tour de France and Giro d’Italia. The other is Robert Hunter, who he helped to win the national road championships earlier this year.

The former Barloworld and Team Sky rider is now looking forward to new challenges as he takes up a coaching and managerial position with the Mecer-NMMU club, as well as starting a new family business venture.

“Obviously it’s been a big disappointment and a difficult decision to stop because I’m still very young in a pro career. But this is a whole new and exciting chapter.”

In addition to managing the university-based club, he will also be opening a boutique-style cycle shop in August with his brother Wesley, who is well known in downhill racing circles.

“Augustyn Brothers is not going to be just another bike shop.”

The ex-U/23 national road champion, who, with fashion designer wife Greta Tonoli, was until recently based in Italy with Team Utensilnord-Named, said the shop would draw strongly on European influences.

He said his team management had been very supportive following his ongoing health problems and had encouraged him to take a break in order to recover fully.

“The manager said I should not injure myself further as I still have a future to think about. They have an open-door policy and I can go back when I’m ready.”

In 2007, Augustyn broke the neck of his left femur during a crash in the Tour of Portugal.

Two years later, the pins that had been inserted had to be removed as the bone had grown over them, resulting in inflammation of the surrounding muscles.

The procedure, however, cut off the blood supply to that area, resulting in osteonecrosis, which caused the bone to start crumbling.

“I had symptoms like numbness or ‘dead leg’, which was aggravated by hard training and long tours.”

Initially dismissed as purely mental, the problem was later identified by Dr Jeroen Swart in Cape Town, which led to an innovative hip resurfacing surgery in March last year.

Although it has given him full mobility of the joint, Augustyn said he battled to recover fast enough for his new Italian team during the highly competitive stage races.

“I struggled with elevated chrome and cobalt levels in my body due to the toxins from my prosthetic hip.”

While taking a break from the bike, he maintains his fitness levels with walking, swimming and gym. Despite being unable to ride at the moment, he said he relished the prospect of sharing his nutritional and technical knowledge with local cycling enthusiasts.

Augustyn’s first assignment will be to guide Mecer-NMMU through the University Sport South Africa Cycling Championships in Wellington from July 2 to 6. 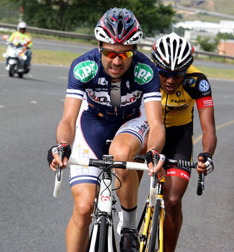