David George and Kevin Evans came out all guns blazing on the opening stage of the three-day sani2c, presented by BoE Private Clients, in KwaZulu-Natal on Thursday.

The Nedbank 360Life riders drove the pace from the start to take the 86km first stage from Underberg to McKenzie Club near Ixopo in a record-shattering time of 2:35:44.

In what was essentially a one-two for the professional outfit, they were followed home in 2:37:49 by James Reid and Charles Keey, who rode as Nedbank 360Life-Blend.

Brandon Stewart and Darren Lill of FedGroup-Itec Connect-Bonitas, who were thwarted by technical problems at the base of the final climb, recovered well to take third in 2:40:33.

Four-time winner Evans said he and George had intended to make the racing hard from the outset with the aim of forcing an early break. “We were hoping to build a comfortable margin going into day two and it seems to have paid off for us.”

Fresh from their victory in the Old Mutual joBerg2c, the on-form pair attacked on the opening climb after 7km.

This effectively splintered the lead group, leaving Stewart and Lill, Reid and Keey and Bell Cycling-Columbia’s Gawie Combrinck and Nico Bell in the chasing bunch.

“We hit it hard and then it was pretty much flat box all the way,” said Evans. “I’m glad we both had the legs to keep that tempo up.”

The leaders opened up a minute-and-a-half gap on the chasers as they entered the Oak Lane single track at the 15km mark.

By the time they reached the floating bridge at around 28km, the time-split was two minutes. The duo maintained this margin coming out of the forest at the first waterpoint 9km later.

With Bell and Combrinck having dropped off due to mechanical issues, Stewart and Lill were left to push the pace as Reid and Keey sat on.

By the second waterpoint after 63km, the chasers had narrowed the gap by 30 seconds but then disaster struck as Lill’s chain snapped coming out of the final section of single track.

“That’s mountain biking,” said a disappointed Lill. “We’re going to go on the attack tomorrow and just see what we can do.”

In the women’s race, Theresa Ralph and Karien van Jaarsveld of DisChem- Britehouse-MTN crossed the line in 3:07:33, closely followed by the two bizhub-FCF pairings of Catherine Williamson and Ischen Stopforth (3:09:40) and Leana de Jager and Nicci Grobler (3:16:55).

“It’s nice to have some strong riders to look out for,” said Ralph, who is on top form following back-to-back race victories in the MTN National Marathon Series.

“I’m a bit stronger than Karien at the moment. Although she starts off slowly, she warms up and then just machines and powers all the way through, so I think on day two and three we’re just going to turn it on.”

Contego 28E’s reigning champions Erik and Ariane Kleinhans once again laid down the gauntlet by taking the lead in the mixed category in 2:59:22.

Cherise Taylor and Dwane Stander were second in 3:09:49 with Carel Bosman and Yolandi du Toit of bizhub-FCF rounding out the podium in 3:17:53.

Friday’s second stage features a spectacular descent into the Umkomaas Valley as part of the challenging 99km route from McKenzie Club to Jolivet Farm in the Highflats region.

The race finishes at Scottburgh High School on Saturday. 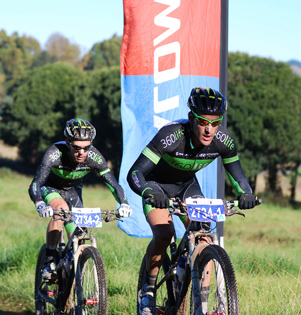 Kevin Evans (right) and David George came out all guns blazing on the first stage of the three-day sani2c, presented by BoE Private Clients. The 86km route took riders from Underberg to McKenzie Club near Ixopo in KwaZulu-Natal. Photo: Coetzee Gouws/Full Stop Communications