Riding in the colours of Team FedGroup-Itec Connect, former South African cross-country champions Stewart and Rossouw are raring to go against the Nedbank 360Life pair.

“It’s always a good tussle between our teams,” said Stewart, who is based in Hilton in KwaZulu-Natal. “This race is going to be a big challenge for us.”

He said they would be racing each other throughout the season with one of their major goals being the African leader’s jersey at the upcoming Absa Cape Epic.

Evans and George, based in George and Cape Town respectively, issued the opening salvo during Stewart and Rossouw’s maiden outing at the MTN Ride Crater Cruise in October last year.

“Jacques was upfront with Kevin but he had a flat with about two kilometres to go,” said Stewart.

This left Evans to take the title for a third consecutive year while Rossouw, from Cape Town, finished second. George completed the podium with Stewart in fourth.

The foursome is heading for a rematch at the opening event of the MTN national ultra marathon series in Barberton this weekend.

Stewart is quietly confident ahead of the new season after his team ended last year with a brace of wins at the Isuzu Three Towers and FedGroup Berg & Bush multistage events.

“The Addo race is quite strategic in that the beginning’s quite flat but it’s hard in the middle and then the last part is also on open dirt road.

“That makes it quite a tactical race. You need to be able to put a team-mate in the right place at the right time.”

He said the fact that there were no king of the mountains hotspots or sprint primes this year would also affect the teams’ strategies. “Because there won’t be any riders trying their luck for the spot prizes, it will probably settle the race a little bit.”

According to race director Brad Jackson, the feature race, which starts and finishes at the Addo Polo Club, will be five kilometres shorter than previous years.

“The serious mountain bikers want to get up into the mountains as quickly as possible. We tried to cut as direct a route as possible from the start for the 60km Adventure and the 80km Extreme to get to the exciting stuff.”

In the women’s event, Stewart’s wife, Bridgette Minnaar-Stewart, will be making a “surprise” comeback to off-road racing for her husband’s outfit.

“To be honest, it’s not really a comeback as I’ve never been a cross-country or marathon racer. My roots are in downhill,” said Minnaar-Stewart, a multiple national and African continental champion.

She is likely to face off against defending champion Ariane Kleinhans (Stellenbosch) of Team Contego-Giant-Sludge and last year’s runner-up Ischen Stopforth (George) of Team bizhub-FCF.

Enter at www.heraldcycletour.co.za or at cycle shops in Nelson Mandela Bay before January 30. 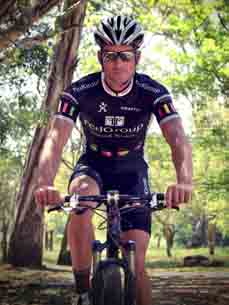