Cyclists descending on Port Elizabeth for The Herald VW Cycle Tour on February 4 and 5 will experience the hospitality for which The Friendly City is known, thanks to the support of a local hotel group.

Town Lodge PE, which has been a sponsor of the event since opening on the beachfront last year, is offering special cycle tour packages to participants and their families.

General manager Glenn Pappin said these discounted rates would apply from Thursday, February 2, until Sunday, February 5, and were valid for all hotels in the City Lodge group, which comprises the two-star Town Lodge, three-star City Lodge and four-star Courtyard Hotel.

“As a group, we take a keen interest in sporting and cultural activities in various parts of the country, including cycling here in the Eastern Cape.

“We are really looking forward to a lasting relationship with The Herald VW Cycle Tour and seeing it grow in popularity.”

Pappin said Town Lodge PE’s position on Beach Road was within easy walking distance of Hobie Beach, which is the start/finish area for the weekend festival of cycling.

The road events include the family and children’s races on the Saturday and the 105km Classic and supporting events on the Sunday.

Hobie Beach will also be the site of The Boardwalk Race Village marquee, where the pre-race expo and registration take place on the Friday and Saturday.

Because of its proximity to the event, Pappin said his hotel would once again make “splash and dash” refresher rooms available to the pro riders before the prize-giving and television interviews.

“In addition, we have a secure storage area where cyclists will be able to put their bicycles and other bulky items they don’t want to keep in their rooms.”

Pappin said the hotel group offered a total of 623 rooms across the city and the first riders were expected to check in from Monday, January 30.

The promotional code for the accommodation offer is available on the Herald VW Cycle Tour website (www.heraldcycletour.co.za). Riders can enter online or at any local cycling shop before January 30. 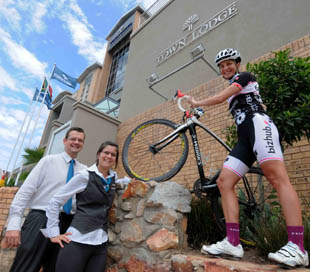