Local boy Kellan Gouveris is aiming for a debut to remember when he takes part in his first road race as a professional at The Herald VW Cycle Tour in Port Elizabeth on Sunday, February 5.

The 17-year-old Pearson High School pupil, who signed a two-year contract with the Tasol-GT team in December, said he was looking forward to launching his career in his hometown. “It’s fantastic because everyone here knows me.”

Gouveris said the cycle tour, which is the second oldest national classic, held a special place in his heart.

He came first in his age group over that distance in 2008, placed third overall in the 79km event the following year and went on to win the latter in 2010.

This year, Gouveris has set his eye on the podium in the 105km Classic. “I don’t see why not?”

One of his team-mates, Nolan Hoffman, is a former winner and another, David Maree, was third last year. “I just need to follow them and I’ll be okay.”

The prize purse of R100 000 that is up for grabs between the mountain bike and road races has understandably grabbed the attention of the pro teams.

“It’s one of the top national classics and obviously a big goal for the team. With me being a local and it being my first race for them, they want me to do as well as possible.”

Gouveris, who sees himself as a sprinter, said the course suited him because there were really only the two climbs at Theescombe and Maitlands to negotiate.

“I don’t think many riders will get away on the last climb as it’s only halfway. Then it’s basically flat all the way home.”

The former U/16 South African road and track champion already impressed his home crowds in February last year when he came third in the junior national road championships.

After that, he switched his focus to track sprinting and qualified for the junior world track championships in Moscow last August.

“I did five events, which was quite a lot, but the main one that got people’s attention was the 200m, which I rode in 10.6 seconds.”

Among those who were impressed was Tasol-GT’s team owner and principal rider Dean Edwards, who had decided to retire and was looking to develop a replacement sprinter.

Gouveris said Edwards decided to offer him a contract after seeing his name among the winners at the nationals. “When he saw how hilly the circuit was, he knew that I had huge amounts of endurance for a sprinter.”

Gouveris accepted and was released by his local amateur club Mecer-NMMU. “They did a lot for me. Riding for them was a good stepping stone into professional racing.”

Once he completes his matric this year, Gouveris will relocate to Johannesburg to concentrate on his newfound career.

Studying, “possibly mechanical engineering”, also forms part of his plans. “But it will have to be night classes.”

Enter on www.heraldcycletour.co.za or at local cycling shops before January 30. 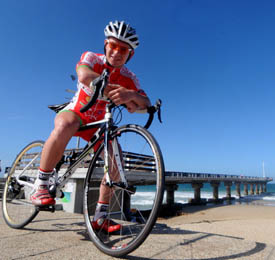 Local boy Kellan Gouveris is aiming for a debut to remember when he takes part in his first road race as a professional at The Herald VW Cycle Tour in Port Elizabeth on Sunday, February 5. Photo: Fredlin Adriaan/The Herald