With a R100 000 winners’ purse and lucky draw prizes valued at almost a quarter of a million rand, The Herald VW Cycle Tour is officially the Eastern Cape’s richest cycle race.

The 27th edition of the national classic, which takes place in Addo and Port Elizabeth on February 4 and 5, will once again offer lucrative rewards to roadies and mountain bikers alike.

According to VWSA general manager of communications Matt Gennrich, the tour’s proven track record and national media coverage made it a very low-risk sponsorship with good returns in terms of brand exposure for the company.

As the largest private sector employer in the area, Gennrich said it was also important for the Uitenhage-based producer to “make a statement” to metro residents. “We are about people and cars; it therefore makes sense that we give away a locally produced vehicle in this premier event.”

He said cycling was a growing sport and that the profile of event participants fitted the company’s target market.

Echoing his sentiments, co-sponsor Tony De La Mare of Tony’s Furniture, Appliances & Beds said he had received good support from the cycling community due to his involvement with the event over the past five years. “We certainly get people coming in and buying from us because we support cycling.”

His store, which is situated close to one of the 105km Classic’s sprint primes on Buffelsfontein Road, has donated R50 000 worth of white appliances for the lucky draw.

Also up for grabs are two premium GT road and mountain bikes worth a combined total of R45 000 from Cyclo Pro/GT. GT regional manager Stephen Craddock said these prizes would include bike set-ups, with servicing handled by Cyclo Pro.

Powerade, which sponsors the family and children’s races, has donated 10 product hampers, while The Herald has contributed newspaper subscriptions and other promotional items.

Swarovski crystal jewellery from Jenni Collections and Bayside Pantry vouchers from The Boardwalk Casino & Entertainment World round out the prize list.

Prize money will be awarded in the racing categories for the 105km Classic as well as to the top men’s and ladies’ finishers in the 80km Extreme and 60km Adventure off-road events.

The mountain bike prize-giving takes place at noon on the Saturday at the Addo Polo Club.

The road awards will be made from 1pm on the Sunday in The Boardwalk Race Village marquee at Hobie Beach, which will be followed by the attendance-only lucky draws.

All registered participants will be automatically entered into the draw, so enter online at www.heraldcycletour.co.za or at local cycling shops before January 30. 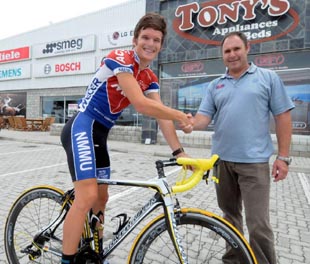