The annual holiday pilgrimage from Gauteng to the KwaZulu-Natal south coast is best undertaken in an air-conditioned luxury vehicle or aircraft.

So when 600 men and women choose to forgo the comfort of a leather seat for an unforgiving saddle, and horsepower for pedal power, one is forced to question their sanity.

The answer is of course the lure of mountain biking endurance events and, more specifically, the nine-day Old Mutual joBerg2c. At 910 kilometres, it is the longest paired stage race in South Africa.

“It’s all about a different challenge, of getting out of your comfort zone,” says David Coutts-Trotter, chief executive of Sun International and two-time alumnus of the event.

“That and the amazing camaraderie and spirit of the event – it has a very special atmosphere, as I think anyone who completes it can attest to.”

In May, Coutts-Trotter was among the intrepid riders who set off on the two-wheeled journey from Heidelberg just south of Johannesburg to the resort town of Scottburgh.

As they crossed the rural heartland of the country, these privileged few were granted access to a string of over 90 private farms spanning the agricultural spectrum.

From the north-eastern Free State, the riders made their way over the escarpment and along the foothills of the Drakensberg before descending into the magnificent Umkomaas River Valley en route to the Indian Ocean.

“It really is a fabulous route with some of the very best riding available,” says Coutts-Trotter, who was determined to finish this year after health problems saw him miss three days of the inaugural event.

He says the physical challenge quickly becomes a mental one and therefore the support of your riding partner becomes critical.

“I must say, I managed to remain fairly positive throughout, despite two hard falls. As you’re going down the feeling of dread is awful.”

Coutts-Trotter is just one of a growing number of top execs who use mountain biking as an escape from the stresses of their high-pressure existence.

“I don’t think about business when I’m on the bike. It helps to get very involved in the route and its stats.”

Punted by some experts as the “new golf”, mountain biking attracts high net-worth individuals like Coutts-Trotter who can afford to indulge in what can ultimately be an expensive hobby.

Badenhorst recommends lightweight wheels and suspension fork, followed by a top-of-the-range groupset (gears, brakes and so forth) as the next must-have items on a rider’s wishlist.

“After that, it’s pretty much what you wear – like a super-light helmet, eyewear with photochromic lenses and the most technically advanced clothing, shoes and gloves available.”

Blessed with good weather and varied terrain, SA is hallowed ground for mountain bikers. With 25 mountain bikes sold for every road bike, the local market is booming.

Badenhorst, who has more than 20 years’ riding and racing experience, says one can spot a mountain biker by his all-terrain vehicle with bike rack.

“He plans his year around mountain bike trips or certain major races. He usually has scratches on his arms or legs from pushing the limits on his last ride and sometimes has his arm in a sling as a result of discovering where those limits are.

“He’s a family man and quite health conscious, but likes a beer as a post-ride recovery drink. He is either in middle or top management, or a business owner.”

That being said, Badenhorst acknowledges that women make up 40 per cent of the market, although they are less likely to fit the stereotype.

Badenhorst attributes the growth of the discipline to two catalytic events – the establishment of the MTN National Marathon Series in 2003 and the Absa Cape Epic a year later.

“The former gave the sport year-round structure while the latter stimulated the creation of other stage races like the joBerg2c.”

The Old Mutual joBerg2c attracts not only professionals vying for the R330 000 prize purse, but also social riders out for the adventure of a lifetime. The average age of participants is 43 years.

“The freedom of riding a bicycle in the bush is something many South Africans enjoyed as kids,” says Badenhorst. “Events like the joBerg2c let them return to that place, literally and figuratively.”

Measuring every ride in terms of distance, time, heart rate and power output is generally the preserve of those Badenhorst calls “dirt roadies” – recent converts from the more goal-orientated discipline of road cycling.

“Unlike road cycling, where the tar is predictable and, well, boring, mountain biking throws up a surprise around every turn. This makes conquering a stage extremely satisfying.

“Conquering nine in succession makes the joBerg2c a rather exclusive and memorable journey that can be life-changing.”

He says the “puncture factor” is what separates dirt roadies from the mellower mountain bikers, who ride for fun and freedom.

“They expect to puncture at some point and when it happens they use the opportunity to chat to their buddies, drink some fluid, munch an energy bar and take in the scenery. When a roadie punctures, you’d think it’s the end of the world!”

Something of a purist himself, Badenhorst believes too much gadgetry can be a distraction from the simple joys of the ride and the thrill of mastering often unpredictable and rugged terrain.

“It’s quite liberating to get lost and unlost occasionally . . .” 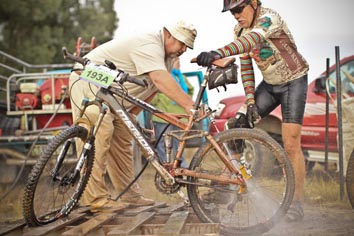 Genuine farm-style hospitality is a hallmark of the eight overnight stops. Rural communities roll out the red carpet for riders as a fundraiser for their local schools, churches and charities.Photo by Kelvin Trautman