The University of Johannesburg’s director of sport, Sanpat Coetzee, was honoured with the vice-chancellor’s award for service beyond the call of duty at a special ceremony on Wednesday evening.

Coetzee, who has over 30 years’ service with the institution and its predecessor, Rand Afrikaans University, was also the first woman in South Africa to be appointed to the top post in sports administration.

She was instrumental in establishing the first and only unit for sports psychology at a South African university.

Acting vice-chancellor Professor Henk Kriek said the award was in recognition of her outstanding contribution over many years and that sport formed an important ingredient in UJ’s holistic student experience.

He said Coetzee had also been a key figure during the four-year merger between RAU, Technikon Witwatersrand and the Soweto and East Rand campuses of Vista University, which started in 2003.

“Her transformational leadership has enabled the institution to create sustainable structures for the promotion of sport at all levels, including sport for students with disabilities.”

Coetzee said the award had been completely unexpected and that she felt blessed and privileged to receive it. “It’s not something that you work for; it’s just the cherry on top of doing a job that you’re passionate about.”

She said her role had changed significantly over the years and that every day brought a fresh challenge.

“Some people think our job is sitting next to a sports field under an umbrella, but these days sports management is a full-time strategic and operational career.”

In addition to its high-performance programmes, Coetzee said the university has sports clubs spread across all four of its campuses to encourage participation by as many students as possible. “In that way, internal leagues and fun days play a huge role.”

She said the support of good staff members, who sacrificed many evenings and weekends to arrange sporting events, had been integral to her own and UJ Sport’s success.

“In most sporting codes, provincially and in the university environment, we’re in the top three. So we’re doing well but there’s always the challenge to do better.”

“It’s nice to see them coming from our structures and even better to see them being good, holistically developed human beings.”

The Florida North resident said the highlight of her career had been successfully steering the new university through its transitional phase and re-establishing UJ Sport within the tertiary environment.

“Three institutions with three sets of staff and three separate cultures had to merge into one team with one belief system. I was just one of a group of people who joined hands and led the staff through a very difficult and challenging time.”

She said she was now looking forward to mentoring the younger managers and enabling them to lead the next generation.

“I’m not easily threatened, so the way I lead is to allow staff members to be better specialists in their fields than I am. My role is just to co-ordinate everything.”

Having previously competed in athletics, hockey and squash, Coetzee said she now uses her free time to engage in her chosen sport of “shuffling” – the slowest form of jogging. 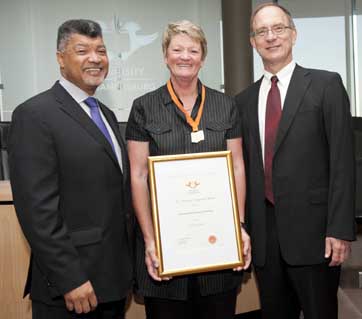