Audiences recently got a taste of the latest summer fashions as some of Port Elizabeth’s cutest kids vied for the titles of Mr & Miss Pier 14 at the shopping centre’s fashion show.

Nathan Whitebooi (Schauderville) and Megan Scott (Despatch) were named the winners in the senior category for youngsters aged 14 to 18 years, while the respective crowns in the category for teens, for kids aged 10 to 13, were donned by Chad Mattew (Korsten) and Sherney Movers.

Tirique Zimdani (Korsten) and Miskhaat Stemmet (Sidwell) were adjudged the cutest in the mini section for seven to nine-year-olds, with Nervino Harmse (Sydenham) and Kaydé Erasmus (Ferguson) getting the nod in the tiny section for three to six-year-olds.

“This is the second year that we have incorporated the Mr & Miss Pier 14 aspect into the annual fashion show,” said Sophia Steyn from centre management.

“We had a lot of entries and the turnout on the day was fantastic. The area around the stage was packed and it seems we’ll have to find more space next year.”

Steyn said the concept had proved to be very successful and the centre intended to continue with it on an annual basis. “It also gives our shoppers some great gift ideas as we head into the festive season.”

She said participating stores had achieved a combined month-on-month growth in turnover of 21.6 per cent and much of this could be attributed to the show.

The event also provided a platform for showing the work of two local designers, Luvuyo Zinco and Craig Alexander, whose evening dresses and denim jeans were worn by the teenage contestants.

The two have established their own clothing businesses with support from The Hope Factory, which assists previously disadvantaged entrepreneurs. 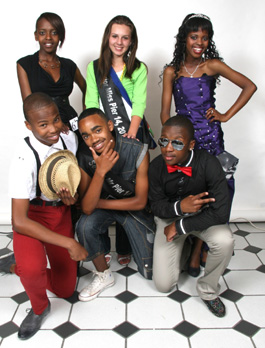