It will be sprinter versus climber as defending champion Roger Pheiffer and two-time winner Conrad Viljoen go head-to-head in the sixth edition of the Mecer-NMMU Cycle Race in Port Elizabeth on Sunday, November 20.

He said he was looking forward to a rematch with the 27-year-old former Eastern Province and national student champion.

“Conrad’s also been off the bike for a while and is making his comeback, so I’m sure he’s going to come out with all guns blazing.”

Also in the mix, said Pheiffer, would be Viljoen’s new team-mate and former U/23 national champion Clinton Barrow, who rode professionally for the now-defunct DCM team.

“They’re both strong riders and better climbers than I am. Plus they’ve got youth on their side.”

The 34-year-old said Viljoen had dropped him on the two major climbs at Maitlands and Three Sisters last year, but he managed to catch up again.

“The climbs are about halfway into the race. It makes it interesting because there’s a long road to the end with lots of time to make up lost ground.”

Pheiffer said the 100-kilometre route was always challenging and that it would be anyone’s race on the day.

Getting underway at 7am, the event starts and finishes at the Xerox-NMMU Stadium on the Nelson Mandela Metropolitan University’s South Campus in Summerstrand.

NMMU sports manager Theresa le Roux said there would also be a 45km race and criterium events for children between the ages of two and 10.

Originally scheduled for October 2, she said the organisers had decided to postpone the event due to dangerously wet and windy conditions on the day.

“Although the new closing date for entries is November 17, there will be no penalties for late entries because of the postponement.”

Registration, where late entries will be accepted, is at the stadium clubhouse on Saturday, November 19, between 1pm and 3pm.

Prize money and lucky draw prizes are up for grabs.

Entry forms are available from cycle shops in PE or riders can enter online at www.leisurecycletours.com. 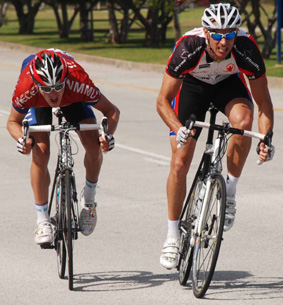