At age 34, Roger Pheiffer is proving that seasoned wisdom can often take you further than a fresh pair of legs.

The former junior Bok is sprinting up the comeback trail after a victory in the recent Makro BestMed Cycle Tour in Port Elizabeth.

The tour is the fourth high-profile race to be added to the medical aid company’s growing portfolio across the country. The others are the Jock Cycle Classique, Campus2Campus Classic and Jacaranda Satellite Classic.

Pheiffer also showed his mountain biking mettle when he and his partner, former pro rider Nick Cape, took a podium finish in the 230km Trans Baviaans in August.

Three months prior to this, the PE resident signalled his intent with a third in the sub-veteran category at the national cross-country championships.

However, Pheiffer – who won just about every national road and track title in the junior classes – remains modest about his achievements following a decade-long break from cycling.

“I thought I could get back to where I was in six months to a year,” he laughs. “But it’s actually taken me two years to get back to a competitive level.”

The first indication that Pheiffer was returning to serious form came when he won last year’s Mecer-NMMU Cycle Tour.

“That was my first win. I’d been training on and off-road, just building on my fitness without any specific event in mind.”

He admits he enjoys the longevity that mountain biking affords and attributes it to the mental and physical endurance that comes with age.

“As you get older, you get to know your strengths and weaknesses and how much your body can take. When you’re younger, you tend to misjudge the blowout point.

“Look at Kevin Evans and David George, they are two of our top cyclists. There are a lot of guys in their mid-thirties who still have some good years left.”

According to Pheiffer, he compensates for the physical effects of ageing by training smarter. “I now have to incorporate a bit of interval training here and a couple of sprints there, so I get the most out of my time.”

These days, time is something he has precious little of between his work and family commitments. He is married to Deaana and they have two children, five-year-old Giselle and three-year-old Travis.

“My family must come first, they can’t suffer because of cycling. I get up at 4am and ride for about three hours, so I can get back early enough to see them before I leave for work.”

Pheiffer takes a balanced view of life and an old-school approach to what he says is ultimately just a hobby. “Cycling’s got to fit in with my lifestyle, not the other way around.”

Nutritionally speaking, he tries to keep his diet as healthy and natural as possible and, aside from a protein shake after a long ride, steers clear of artificial supplements.

Pheiffer holds no truck with heart rate monitors or power meters either, although he acknowledges that, if used correctly, they can provide an advantage. “I feel that I know what I need to do to compete at my best.”

He reckons he has a lot of mileage left in him. “I’m in it for good. Maybe next year or the year after, I’m looking to go to the world track champs.”

This eagerness to return to international competition comes more than 15 years after he last represented South Africa at the Junior World Track Championships in Italy.

“When I was younger everything was just focused on cycling. The break helped me because eventually I got hungry to ride again.”

Managing his brother’s (former Springbok cyclist Wayne) cycle shop for the past three years has clearly reignited his passion for the sport.

The entire Pheiffer clan, including nephews Brent and Shane, have represented the country at international level.

“My own kids are both very keen. They love their BMXs already and are always nagging me to ride.”

Pheiffer says his children are his most ardent supporters because they still believe their dad is the strongest and the best at what he does.

“My wife told my daughter that I won and she said, ‘But Daddy always wins!’ That isn’t true, but I’ll let her believe it until she wises up.” 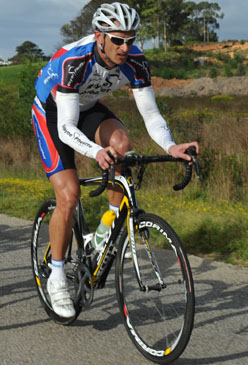