Newly-crowned national cross country champion Tshamano Setone will be out to prove that his victory was no fluke when he goes head-to-head with former titleholder Stephen Mokoka at the University Sports South Africa (Ussa) championships in Potchefstroom this weekend.

Setone, a student at the University of Johannesburg, edged out Mokoka in a thrilling sprint finish in Bloemfontein two weeks ago to bag the elite title for the first time.

The Tshwane University of Technology runner then returned the favour when he narrowly held off Setone in the 10km road race that coincided with the Cape Town Marathon on Sunday.

Their ding-dong rivalry has set up a mouth-watering clash for this weekend, where Mokoka’s student cross country title will be on the line.

“Stephen and I are very close, but when it comes to a race we put our friendship aside,” said Setone. “We enjoy running against each other because it’s always a close fight.”

The 24-year-old said it would be the first time that he competed at the Ussa event on the dirt and that he would be out to prove himself. “A fast pace favours me, but if it’s more tactical it could be anyone’s race.”

A relaxed Setone said his training had been going well in the lead-up to the championships and he felt his form was good enough to challenge for the win.

After this weekend, he said his focus would shift to the Olympic Games, where he hoped to compete in the 5 000m track event.

The triple national 5 000m champion said he was working towards breaking Shadrack Hoff’s 16-year-old SA record next year and also to run a sub 13-minute time, of which he was still 25 seconds shy.

The transportation management student is one of four UJ athletes included in Athletics South Africa’s provisional team for the African Cross Country Championships in March next year.

The others are Nolene Conrad (senior women), Armin Botha and Mampielo Sibanda (both junior men), who all achieved podium finishes at the recent national championships.

UJ athletics manager Thabiso Moletsane described their inclusion as a big achievement for the tertiary institution.

“We’re especially proud of Setone’s performances. He is a very versatile athlete and a national champion in multiple disciplines in the same season.” 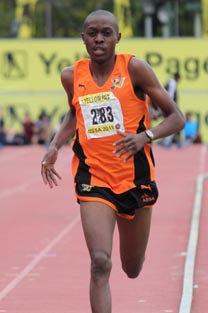