Organisers of next year’s Old Mutual joBerg2c have introduced a number of innovations allowing young guns and lone rangers to saddle up for this nine-day mountain bike race.

The first trailblazing initiative is the recently launched “ride like a pro” concept, which sees sponsorships available to promising young riders in the men’s, ladies’ and mixed team categories.

“There is a band of talented youngsters who haven’t been signed to a pro team and can’t afford to ride the big stage races,” says one of the organisers Craig Wapnick.

“We’d like to give them a chance to add to the racing upfront and possibly get themselves noticed.”

Wapnick says semi-pro and top-tier amateurs between the ages of 18 and 30 are welcome to apply. The successful candidates will be awarded their full entry fee plus kit in the colours of sponsors that back the initiative.

“Prospective teams will need to submit a proposal of two pages or less explaining why they deserve the sponsorship.”

According to Wapnick, he and fellow organisers Glen Haw and Gary Green will evaluate each entry based on criteria such as age, financial need and track record in other events.

“We will also look at the fun element and effort that went into the proposal. Applicants should include a riding photograph of themselves and an accurate set of results.”

The closing date for entries is November 30 and the chosen teams will be notified by December 31.

For those cowboys wanting to take on the 910-kilometre trek from Heidelberg to Scottburgh alone, the organisers have also established a special non-racing solo category.

“We’ve had a lot of requests from international riders, media representatives and people in small towns who struggle to find suitable partners,” says Wapnick.

While international stage racing rules dictate that the race remain a team event, he says the solo category gives these individuals a chance to push their physical frontiers.

“Although they can’t compete for the R330 000 prize money, the solo riders will be part of the camaraderie that makes this event unique. Who knows, some may even find a future riding partner.”

Wapnick says all participants will be closely monitored throughout and rounded up in case of medical or mechanical problems.

“The route is easily accessible and we’ve got good off-road rescue support, so solo riders will have all the back-up they need.”

Individuals will still receive official times and positions, says Wapnick. “They will be batched according to their times, with the rest of the field, at the start of each day’s racing.” 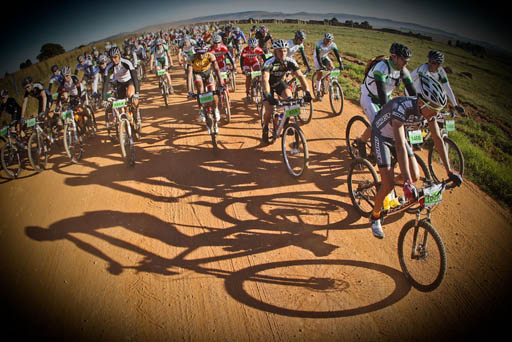