Where many see a future as barren as the dusty ground on which his teams practise, Diepsloot hockey coach Silver Malele sees hope.

“We don’t have an astroturf or even grass, just bare ground,” says Malele, who was named Volunteer of the Year at the recent South African Sports Awards. “The fact that boys and girls have been developed to provincial level on that rocky piece of land, you just wouldn’t believe it.”

Malele’s Silver Stars development project in the Johannesburg township, on the northern fringes of affluent Sandton, is giving children from the ages of seven to 17 something positive to focus their energies on.

He believes it helps them avoid the peer pressures and socio-economic pitfalls plaguing his impoverished community.

Starting with half a dozen youngsters in 2001, the unemployed Johannesburg resident now has over 150 players in nine teams. No child is ever turned away.

“On Saturdays, we play round-robin tournaments and the older teams have league fixtures. Sometimes I’m out at 6am and only get home at midnight.”

The father of five says his wife, Precious, sometimes complains about the lack of family time due to his community commitments. “But she’s always there for me and supports me, even though she doesn’t really love the game.”

His wife was standing proudly by when his public-spirited efforts were recognised at Sun City. “I felt so honoured to just be part of the nominees,” says Malele modestly.

The financial windfall from this prize has helped to pay for development clinics, transport and other expenditures. “We need to attend more clinics so that we can move forward,” says Malele.

He is currently a level-one coach and his goal is to reach level six, the highest grading. He also hopes to send some of the older players on umpiring and coaching courses.

Malele’s ultimate goal is to have a dedicated academy in Diepsloot. He is a little closer to achieving this thanks to the involvement of the University of Johannesburg’s hockey club.
A chance meeting with UJ Sport’s Siobhan Brown at a counselling course in 2008 saw the tertiary institution take up his cause. “Thanks to media reports about violence, people don’t want to set foot in Diepsloot, but the UJ people came.”

UJ Hockey’s Elize le Roux says the university has helped with equipment and clinics, assisted in Malele’s development and also with applications for sponsorships, government grants and national lottery funding.

The 42-year-old Malele’s passion for hockey started as a player in the late seventies, when he learned the game at Witkoppen School in the Fourways area of Johannesburg.

After leaving school, he quit the sport on principle. “In those days there was no good treatment,” he says.

“I was selected for Transvaal, but there was nothing support-wise. Like you’d arrive at a hotel on tour and sometimes find your room was not booked.”

But the deep-seated love of the game returned decades later when he decided to do something positive for his community.

“As Africans we are just focused on soccer. So I thought let me do something different and see if the kids would be interested.”

They were and interest grew steadily.

“At training sessions I teach them the differences between soccer and hockey; especially how to protect themselves. The ball is a lot harder than a football.”

Malele says he has seen significant changes in the children who come from far-flung areas.

“They are often in different schools, but, when they are together at Silver Stars, they have the opportunity to make friends and teach and support each other. That’s what I like to see.”

He says he hopes that every child who has been isolated from sport will be able to one day join a team and get a sporting chance. “Playing in tournaments gets them away from all the cruel things that just traumatise and stress them.”

During school holidays, Malele brings in outside speakers to talk to the children and teach them essential life skills.

He says a few successful matriculants have thanked him for the role the coaching played in helping shape their focus and determination.

“They said they only managed to complete their matric because they played hockey. I’d just like to make more of a difference in the coming generation.”

According to Le Roux, UJ is busy developing academic support programmes to assist Malele’s younger players in qualifying for university acceptance in the future.

Two of his biggest success stories are Shirley Machaba and Kabelo Motsatsi, who have both qualified for the Southern Gauteng U/18 sides on a number of occasions. Motsatsi now plays for the Beaulieu College men’s side and is coached by former Olympic hockey player Allistar Fredericks.

Malele has applied for various jobs over the years, but fears that finding permanent employment will mean the end of Silver Stars. “I do this out of love,” he says.

“People don’t want to do volunteer work; they always want something in return. I want more people in the community to get involved so that the project can move forward and become sustainable.”

In addition to his hockey commitments, Malele runs a community food garden and counselling and support groups for HIV/Aids patients and their families at the Diepsloot South Clinic.

“I thank God for everything. He’s the only one keeping my projects going.” 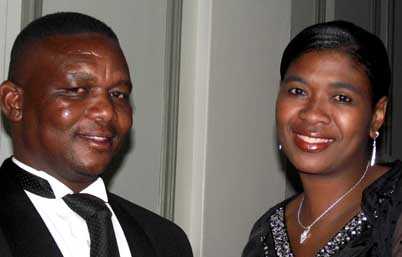 Diepsloot hockey coach Silver Malele and his wife Precious at the South African Sports Awards where he was named Volunteer of the Year. Photo: Supplied by UJ Sport