Two months after the family car was stolen, fortune smiled on Port Elizabeth student Megan Snyman when she won a brand-new vehicle worth R150 000 on a national competition website.

Speaking at the official handover of her Hyundai i20 at the dealership in North End, Snyman said she had discovered the JustPlay website (click the link to visit the website: www.justplay.co.za ) by chance while surfing the internet last year and was instantly hooked.

“There are lots of prizes on offer but I entered this particular competition about 20 times. I really wanted that car!”

The 25-year-old said it would be her first vehicle but that she would share it with her family.

“It will change our lives, especially with all the hassles we had with our previous car. Before it was stolen it was forever breaking down.”

In June, the third-year BCom student was waiting outside her exam venue when she started receiving Facebook messages on her cellphone from people saying they had seen her name among the winners on the website.

“I had to wait until after the exam to confirm that it was true,” said Snyman. “I had to force myself to concentrate. It was difficult!”

The Lorraine resident and part-time maths tutor said she had only been required to complete a short online marketing questionnaire to enter.

“It’s fun, you just go on there, choose which prize you like and you’re in the game. You can enter as many times as you want.”

Snyman’s sister Jaclyn, 21, said the windfall had motivated her to get a driver’s licence. “I’m entering the competitions as well, now that I know it’s for real.”

JustPlay’s chief of play Gidon Alter said this was the second car that the company had given away and the most valuable prize to date. “We received over 306 000 entries for the Hyundai competition alone.”

Alter said JustPlay was the leading online competition website in South Africa with over 110 000 registered users. The Johannesburg-based online marketing company uses the website as a platform for advertising and market research.

“It’s a completely transparent process. When you click on the prize you want to win, the system randomly generates a questionnaire sponsored by one of our advertisers.”

Alter said the website would be increasing the frequency of giveaways to at least one a week.

“Our winners’ testimonials make all the hard work worthwhile. People don’t expect to win and, like Megan, they are always very excited and grateful.”

The family is planning a trip to Cape Town to road test the prize. 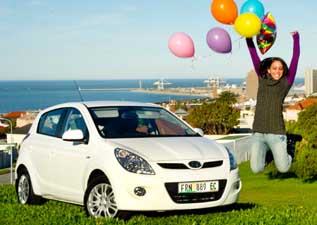