Although 2011 has proved to be somewhat of an annus horribilis for South Africa’s unofficial queen of cycling, Anriëtte Schoeman remains determined to end her season on a high note.

The eight-time national road champion, who races for Nashua-Toyota, will be looking to add a fifth victory in the Momentum 94.7 Cycle Challenge to her list of accolades.

“The 94.7 is a very nice race to win. It’s the last one of the year and everyone is so tired. But a victory there sets you up nicely for the new season.”

In February, the pint-sized pedaller was forced to withdraw from the South African road champs after illness left her weak and exhausted. “It was unfortunate because it was in my hometown (Port Elizabeth) and I really wanted to do well.”

A month later, she also failed to add to her record six Cape Argus Pick n Pay Cycle Tour wins. After crashing heavily just 19 kilometres into the race, sheer determination saw her fight back for an eighth-place finish.

After a 15-year career as a professional cyclist, Schoeman remains undeterred. “In any sport, there are ups and downs; the downs just make you more appreciative of the ups.”

Ups there have been aplenty. Apart from the plethora of national titles, she represented SA at the Commonwealth (1998 and 2010) and Olympic Games (2004). A broken wrist saw her ruled out of contention for Beijing.

The 34-year-old is looking forward to taking on the cream of the rising female crop at the world’s second biggest timed road race in Johannesburg in November.

“I enjoy the undulating course and the drag to the finish suits my sprinting style. If I can get through the roundabout in a good position, and in one piece, then I can possibly get a podium.”

Schoeman says, however, that her first priority is her team and she will be putting all her energy into assisting team-mates like Ashleigh Moolman Pasio and Lynette Burger.

“I’m in the fortunate position that I’ve won most of the races I’ve taken part in, so it’s not devastating if I don’t win it for myself.”

She cites Cherise Taylor of Team USN as her biggest threat on the day and most likely heir apparent.

“Cherise is the next big thing. She’s a brilliant all-rounder and, most importantly, has big-match temperament.

“She’s a clever rider who outwits her opponents and saves her energy. Even if she’s not the strongest on the day, she always ends up in a good position.”

Schoeman says the exposure to high-level overseas racing early in their careers has given youngsters like Taylor opportunities she never had. When she started hers in 1996, it was as an individual on an incentive basis.

“We were all essentially individual riders, then the Liberty women’s team started up and we ended up racing against them.”

Other teams like Proline (for whom Schoeman raced for 10 years) and Konica-Minolta followed. “So we basically started the era of team racing.”

However, she fears that large corporate sponsorships could also be detrimental to the continued growth of women’s cycling.

“If a handful of sponsors overwhelm the sport, the smaller ones start withdrawing and this leaves individuals struggling against the bigger teams.”

Schoeman however remains as enthusiastic as ever about the sport.

“I’ve got a passion for cycling. Shoo,” she exclaims, as if surprised herself at how deeply she feels about it. “I do it because I love it and happiness brings performance.”

Schoeman says she does not believe she is superior in any way, despite her long and distinguished track record.

“Humility and honour are very important characteristics. If you do well, you have a responsibility to the people who look up to you.

Because of this sense of responsibility, she says, she has never cheated in a race or used banned substances.

“Cycling is like a gladiator sport. You fight with honour till the end and you must be gracious in defeat.”

This doesn’t mean Schoeman is ready to bow out and secretly she hopes to notch up a final Argus win.

“I think I’ve got a good two or three years left in me. I’ll definitely ride next year, but I’d like it to be on my terms.”

When she’s finally ready to hang up her helmet, Schoeman is contemplating studying sport massage and finishing her degree in architectural technology.

She’s also currently working on a skincare range, derived from silkworm threads, with one of her sponsors Africa Silks.

“They’re so cute. It’s amazing what you can get from such a tiny little creature,” which couldn’t be truer of the champ herself. 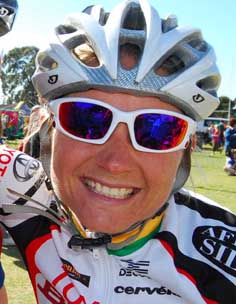 Although 2011 has proved to be somewhat of an annus horribilis for South Africa’s unofficial queen of cycling, Anriëtte Schoeman remains determined to end her season on a high note. Photo: Full Stop Communications