Some of the biggest names in sport and entertainment will come out to bat for charity at the Celebrity Cricket Sixes tournament in Port Elizabeth on Saturday, September 24.

Spectators at Kemsley Park will see a host of former national sportsmen and celebrities face off in 10 six-a-side matches in aid of the Cancer Association of South Africa and JAG Foundation.

Organiser Laurence Finn said the positive response to last year’s inaugural event in PE had made it the natural choice as kick-off venue for the nationwide tour, which consists of six tournaments.

“Every one of the players has given his time for free. They realise this is for a great cause as well as a lot of fun.”

Finn said each of the six teams would be captained by a national cricket legend while the remainder of the team would be made up of a provincial cricketer, rugby legend, two non-cricketers and a local businessman.

He said Dave Callaghan, Eldine Baptiste, Kenny McEwan, Pieter Strydom and Rudi Bryson are among the legends “selected” to lead a team. They will be assisted by Chevrolet Warriors players such as Corbyn Dolley, Reece Williams and Basheer Walters.

According to Finn, the cricketers would either be helped or hindered in their quest for victory by former Springbok rugby players Chad Alcock, Robbie Kempson and De Wet Barry as well as EP Kings team-mates Jaco Engels, Jaco van Schalkwyk and Mzwandile Stick.

“The funny part is that it’s the rough, tough rugby players who are most afraid of the little red ball.”

“Six overs a side is the fastest form of cricket, so it’s fun and full of action. There is a lot of sledging and interacting with spectators.”

Besides the cricket action, Finn said there would be a beer garden, food and retail stalls and children’s entertainment.

“We will interrupt play (at 10.30am) for the Rugby World Cup game between New Zealand and France. It will be shown live on the big screen, so spectators won’t miss a moment of the action.”

Gates open at 8am, with the first match starting at 9am. Tickets cost R20 for adults and R10 for children.

Bookings can also be made for the charity dinner on Friday, September 23. The cost of R2 500 for a table of 10 or R250 per person includes a spitbraai.

At this event, celebrities will share their funniest stories under the theme “What happens on tour, stays on tour, or does it?”.

Captains will be introduced at the dinner and their teams – selected by way of a draw – announced. 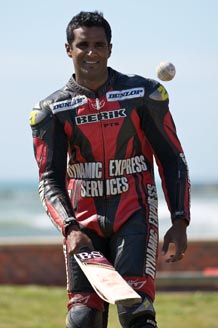