To ensure a great rider experience, entries for the third edition of the nine-day event will be limited, said one of the organisers Craig Wapnick.

The 910-kilometre race, which features 13 130 metres of ascending, will set off on Freedom Day (April 27) from Heidelberg in Gauteng and finish at Scottburgh on the KwaZulu-Natal south coast.

“To whet the appetite, we’ll be screening an hour-long highlights package from this year’s event at 8.30pm tonight on SS7 (on MiWay Mountain Biking),” said Wapnick.

Billed as “a journey of the soul”, the race takes riders across the country’s agricultural hinterland in the north-eastern Free State and along the foothills of the Drakensberg before finishing at the coast.

Wapnick said the route traversed more than 90 farms and comprised a combination of single track and private dirt roads that were generally inaccessible at any other time.

“Apart from more single track, the skeleton of the route is the same. We’ll be visiting the same towns and offering the same great race villages.”

He said although the route had been finalised, they would be out on the trails later this month to look for ways to build more fast-flowing single track in their ongoing quest to provide the ultimate mountain biking experience.

Wapnick said the event – which was started by Glen Haw, Gary Green and himself – was quickly becoming one of the must-do stage races in the country.

The middle and last three days follow the sought after FedGroup Berg and Bush and Subaru sani2c races created by Green and Haw respectively.

Wapnick said international interest was also starting to grow as a result of word-of-mouth and overseas publications picking it up.

He cited the example of Tour de France commentator, Phil Liggett, who had become a passionate advocate of the race after taking part in the first two.

According to Wapnick, the 2011 prize purse of R300 000, of which the winning team took home R100 000, had attracted the country’s top professionals and he expected the same for the upcoming event.

This year’s champions in the elite men’s and women’s sections were South Africans Neil MacDonald and Waylon Woolcock of Team RE-CM and the South African/British combination of Ischen Stopforth and Catherine Williamson of Team bizhub. 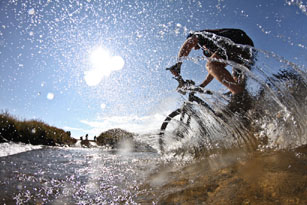 Entries for the third edition of the Old Mutual joBerg2c will open at 9.30pm tonight. Visit www.joberg2c.co.za for more information. Photo: Kelvin Trautman