Team RE:CM’s Neil MacDonald and Waylon Woolcock showed yesterday’s win was no fluke when they clinched victory for a second day in a row to retain their overall lead in the nine-day Fairbairn Capital/Old Mutual joBerg2c on Sunday.

The 125-kilometre third stage between Reitz and the Sterkfontein Dam in the Free State was the longest of the 900-kilometre tour so far. It once again ended in a road-style sprint that resulted in a repeat of the previous day’s podium and a status quo in the overall standings.

MacDonald and Woolcock (4:36:18) stopped the clock one second ahead of MTN-DoItNow’s Max Knox and Adrien Niyonshuti, with FedGroup Berg and Bush’s Brandon Stewart and Darren Lill third (4:36:20). The leaders’ overall time is 12:41:42.

Their combined time of 14:04:05 is just over 40 minutes faster than that of their closest challengers – Team Develop’s Yolandi du Toit and her Mauritian partner Aurélie Halbwachs.

Fairbairn Capital’s Erik and Ariane Kleinhans (5:10:54) came up trumps in the mixed category after leaving Cycle Lab KTM’s Johan Labuschagne and Yolande de Villiers (5:17:21) behind on the technical section after the second water point.

The day’s racing started at a furious pace with the top teams attacking the climb immediately after the neutral zone.

“Darren had some technical issue, probably a flat tyre, and he and Brandon fell behind,” said MacDonald. “They did unbelievably well to catch up with us at the last feeding station.”

At the finish, Knox and Niyonshuti took the initiative, but ruled themselves out of contention for the stage win when the latter overcooked the final bend.

MacDonald said it had been another long, tough day in the saddle. “The district roads suited our style, but the single track and muddy sections were hard.”

He believed they would be at a disadvantage from Monday when the tour heads into the technical terrain of the Drakensberg.

“But everybody is starting to tire, which will make things interesting,” said the overall leader. “The main thing now is to conserve as much energy as possible.”

Stopforth and Williamson were once again in a league of their own, settling into a comfortable rhythm alongside the front-running mixed teams until the former punctured 40 kilometres into the stage.

After giving chase initially, they decided that their lead was healthy enough to “cruise” the final kilometres.

Monday’s stage is from Sterkfontein Dam to Winterton, a distance of 124 kilometres with a total ascent of 1 937 metres. 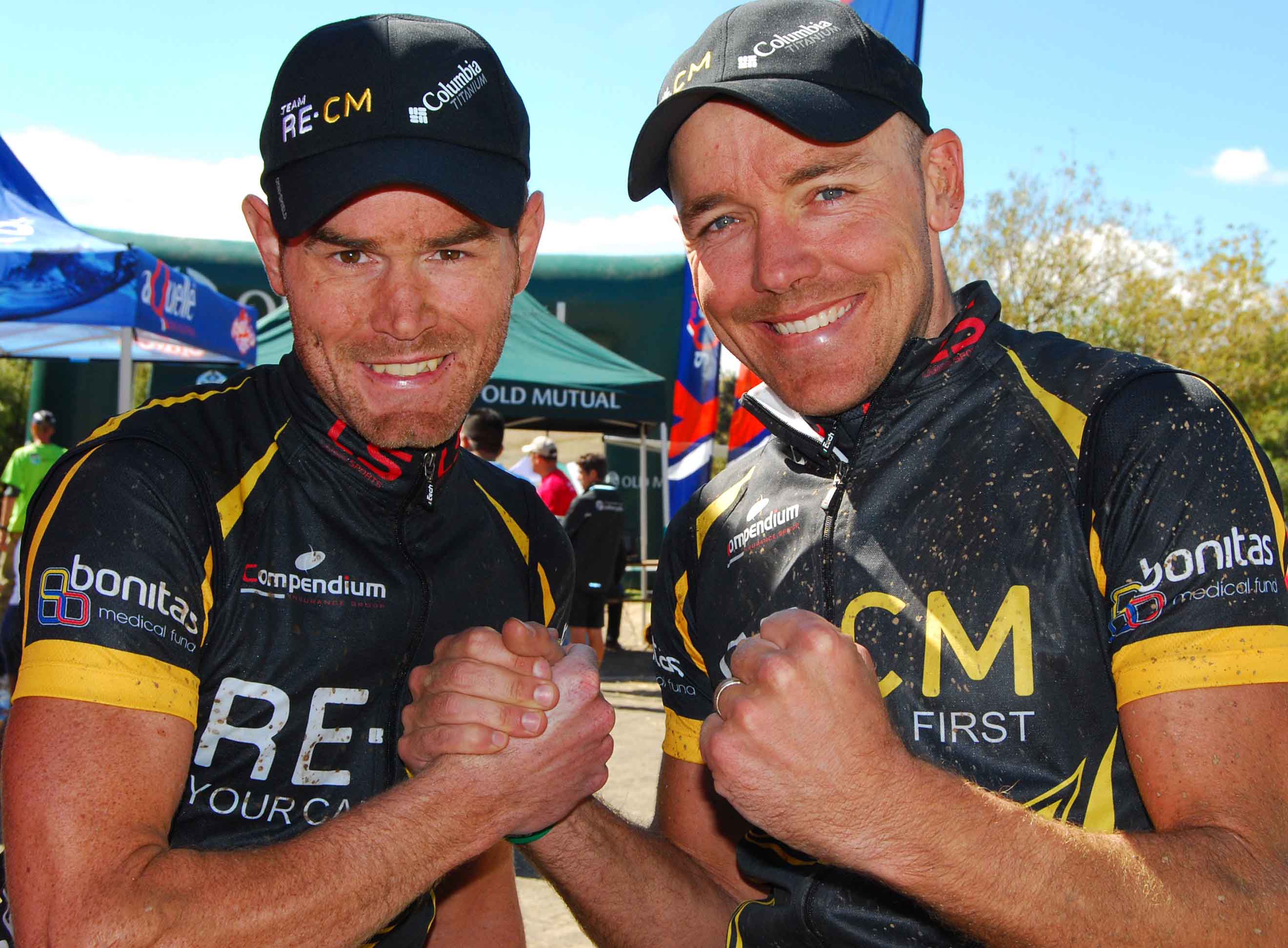 Waylon Woolcock (left) and Neil MacDonald of Team RE:CM congratulate each other after winning the third stage of the 900-kilometre Fairbairn Capital/Old Mutual joBerg2c between Reitz and Sterkfontein Dam on Sunday. Photo: Full Stop Communications