A drama-filled stage eight, the penultimate of the event, saw the overall lead of the Fairbairn Capital/Old Mutual joBerg2c change hands for the first time in a week.

Neil MacDonald and Waylon Woolcock of Team RE:CM galloped to their sixth stage win of the nine-day event after overall leaders Brandon Stewart and Darren Lill of Fedgroup Berg and Bush were left stranded with a flat tyre while leading.

Team RE:CM completed the 99-kilometre stage between Mackenzie Club in Ixopo and Jolivet in the Highflats region of KwaZulu-Natal in 3:45:43 to turn a deficit of just over a minute into a lead of more than 26.

Max Knox and Rwanda’s Adrien Niyonshuti of MTN-DoItNow consolidated their third place in the general classification after finishing second in 3:55:27, while David Morison and Stuart Marais of Blend Properties took their fourth consecutive third-place finish to strengthen their fourth position.

But the story of the day was the technical issues suffered by the overall leaders, which started when Stewart cut the sidewall of his rear tyre in a sugarcane field after the crossing of the Umkomaas River.

According to Stewart, his tyre deflated for the final time about 15 kilometres from the finish and he was forced to finish the stage on the bare rim.

“I’m absolutely gutted about this. We needed the win for all sorts of reasons. But take nothing away from the winners.”

MacDonald and Woolcock were unable to match Fedgroup Berg and Bush on the technical descent into the Umkomaas valley.

“We had to let them go; they were too quick for us. We tried to limit our losses in the valley and focused on maintaining a fast but steady tempo,” said MacDonald.

“A few kilometres after the suspension bridge we saw Fedgroup standing in the road. We were riding over blackish shale and I figured they had a sidewall cut.”

MacDonald said it was “terrible luck” for the former leaders. “It’s a horrible way to lose a race, but I guess it’s part of mountain biking.

“The trick is to minimise technicals, but sometimes it’s unavoidable. We’ve been really lucky.”

Despite two punctures over the closing 30 kilometres, Ischen Stopforth and Brit Catherine Williamson of Team bizhub won the stage in 4:45:59 to extend their tidy overall lead in the women’s section.

Erik and Ariane Kleinhans of Fairbairn Capital went unchallenged in the mixed category, stopping the clock on 4:33:15.

“We loved the course today,” said Stopforth. “We rode with Yolandi (du Toit) and Aurélie (Halbwachs) through the first section of single track, but dropped them when we started climbing.”

She said Williamson really came to the party on the technical portions after a nervous start to the tour.

“We now have a comfortable lead and basically just have to stay on our bikes tomorrow.”

The final stage of the 900-kilometre race on Saturday is a relatively short burst of 75 kilometres from Jolivet to Scottburgh. 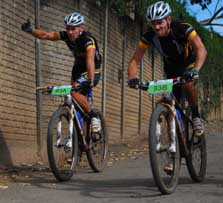 Neil MacDonald and Waylon Woolcock take their sixth stage win as well as the overall lead in the Fairbairn Capital/Old Mutual joBerg2c at Jolivet near Highflats on Friday. Photo: Full Stop Communications