The 21st Nelson Mandela Bay Splash Festival got off to a vibrant start as a bumper crowd took full advantage of the good weather at Hobie Beach in Port Elizabeth on Friday.

Despite the fact that the Easter weekend falls outside the school holidays this year, organisers estimate that between 50 000 and 100 000 visitors turned out to enjoy the jam-packed watersports and entertainment programme.

“We’ve been really lucky with the weather after the poor conditions in the lead-up to the event,” said festival director Glenn van Eck. He said the forecast looked good for the rest of the weekend.

Van Eck said the first day had been an unqualified success, boding well for the festival as a whole. According to him, a number of stallholders had been forced to restock as a steady stream of people sampled the food and crafts on offer.

“The entertainment programme has been very well received – we had a really good audience for the children’s theatre production, Peter Pan and the Pirates, and Steff the hypnotist proved to be a hit once again.”

He said the Watoto Children’s Choir from Uganda also delivered an outstanding performance.

Van Eck said traditionally an even bigger turnout was expected for day two.

He advised festivalgoers to arrive early to avoid the rush. “There are no road closures in the beachfront area but the traffic department will take emergency measures should the need arise.”

On Sunday morning, visitors can look forward to beach volleyball and laid-back jazz.

The evening programme consists of the comedy festival – featuring stand-up acts like Kurt Schoonraad, Barry Hilton, Michael “The Fly” Arthur, Roland Gaspar and Tumi Morake – as well as the final round of the Bay FM Search for a DJ competition.

No incidents had been reported but Van Eck said organisers had been forced to cancel the night volleyball at Hobie Beach. “The tides have been very high in the evenings and the sand walls are not holding due to the strong wave action.”

Visit www.splashfestival.com or the Nelson Mandela Bay Splash Festival Facebook page for up to date information. 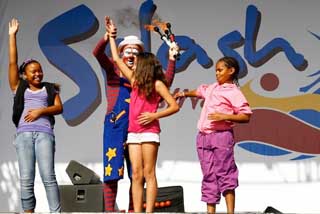