Slovenian open-water swimming champion Rok Kerin showed his class when he won the Bell Buoy Challenge in cold and choppy conditions at the Nelson Mandela Bay Splash Festival in Port Elizabeth on Saturday.

Kerin (27) – who grabbed victory in the 3km event at the aQuelle Midmar Mile in February – used his strong navigational skills in an eight-kilometre race of attrition that saw him claim the R10 000 first prize with ease in 1:38:34

“The conditions were great for a race such as this,” said a clearly untroubled Kerin, rated as one of the top swimmers in the world over 10 kilometres. “I like waves – that’s the whole point of open-water swimming.”

He said he lost sight of the other swimmers between the first marker opposite the Radisson Blu hotel and the Bell Buoy at the halfway point.

Marais lost his way and withdrew with just 600 metres to go. The same fate befell Railoun – who was hoping to give Kerin a run for his money after a narrow loss at the Midmar Mile – when he started cramping and feeling ill just after the Bell Buoy.

It was a good weekend for Nisbet, who with his brother Adam won the doubles title in the 26-kilometre Nelson Mandela Bay Surf Ski Classic on Friday.

Cape Town’s pre-race favourite Dominique Dryding (18) was involved in a battle to the bitter end with Durban’s Nicole Brits (16) in the women’s event.

After swimming shoulder to shoulder, Dryding burst out of the surf zone to snatch victory in 1:55:24 – nine seconds ahead of her rival.

PE-based Sanmari Woithe (41) used her knowledge of local conditions to take third in 2:06:09.

“It’s my first time at the Bell Buoy – I didn’t expect it to be as tough,” said Dryding, an experienced open-water swimmer.

She said Brits had been hot on her heels throughout the race, but really applied the pressure from the Bell Buoy after local favourite Jessica Roux (18) was also forced to withdraw.

Absent from the day’s starting line-up were Indian siblings Richa and Rashmi Sharma – the first sisters to swim the Strait of Gibraltar. They missed the event due to visa problems.

“This is by far the toughest open-water race in the country,” said race official and former Swimming SA open-water head Neville Smith. 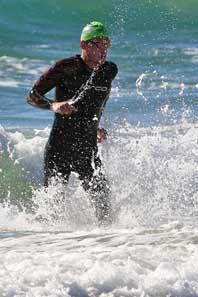