The 21st annual Nelson Mandela Bay Splash Festival had a rip-roaring send-off on Easter Monday as Dr Victor and the Rasta Rebels got the capacity crowd jiving at Hobie Beach in Port Elizabeth.

The concert capped off four days of sunshine in which an estimated 400 000-plus visitors enjoyed jam-packed entertainment and watersports programmes as well as over 200 food and craft stalls.

“The weather played along and we’ve certainly done better than last year,” said festival director Glenn van Eck, noting that there had been a continuous flow of people throughout the weekend.

He said there had possibly not been as many out-of-town visitors due to the fact that the long weekend did not fall during the school holidays this year.

Despite this, stallholders reported better overall trading than in previous years. “Some even ran out of stock due to the demand.”

Van Eck said the biggest attendance day was on Saturday, which included the Bell Buoy Challenge open-water swim in the morning, Canadian singer Justin Hines in the afternoon and the Algoa FM Fireworks and R&B star Loyiso Bala in the evening.

“The Bay FM Search for a DJ was also hugely popular,” said Van Eck. He said the competition, which this year included a boot camp and R100 000 worth of prizes, was designed to put the winner on a sound footing as a professional DJ.

At the Sunday evening final, 21-year-old Shaam Dafunk’s technical ability, mixing skills and stage presence got the audience and judges’ votes ahead of her all-male fellow contestants.

Van Eck said apart from the entertainment programme that also included a Local is Lekker slot and the Comedy Festival, beach-based events like the volleyball and wrestling had been well received.

“The volleyball had the highest number of entries of any tournament on the circuit this year and the wrestling was taped for screening in 25 countries.”

Coordinator Michael Zoetmulder said the watersports programme had been a big success and he was thrilled with the national and international interest.

“(Slovenian swimmer) Rok Kerin told me the festival is on a par with any of the events he participates in around the world – both in terms of atmosphere and organisation.”

Zoetmulder said there had been a good variety of disciplines – including jetskiing, inflatable boat racing, surf skiing, open-water swimming and beach events.

“From our side, we’re looking forward to bringing in more lifesaving events. It suits the King of the Bay elimination format perfectly.”

“One female swimmer in the Bell Buoy Challenge required medical assistance for fatigue and hypothermia, while another member of the public was treated following an epileptic fit.”

He said no road closures were required and public parking areas at The Boardwalk remained full throughout the weekend. 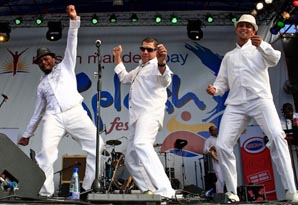