As the crowds gathered to enjoy the comedy line-up on Sunday evening, stallholders at the Nelson Mandela Bay Splash Festival in Port Elizabeth were laughing all the way to the bank.

He attributed it in part to the better quality food and crafts on offer, as well as the fair weather conditions, which drew a large number of visitors to Hobie Beach.

“Based on the crowds we’ve seen over the last three days, we’re definitely expecting to exceed last year’s attendance figures of around 400 000.”

“People visit because they want an experience, which is why events such as these are so important for bringing visitors into the city.”

Van Eck said Sunday was very much meant to be a family day, so organisers kept the entertainment “easy-going and light-hearted”.

Fitting the bill was the heavyweight comedy festival – featuring Roland Gaspar, Michael “The Fly” Arthur, Barry Hilton, Tumi Morake and Kurt Schoonraad – that was now in its second year.

He said the crowds were also expected to stay for the much-anticipated final round of the Bay FM Search for a DJ.

Earlier in the day, said Van Eck, there had been good turnouts for both The Bridge Easter Egg Hunt and Die Burger Sand Sculpture competition. “The finals of the beach volleyball were also very popular.”

The proceeds from the Easter Egg Hunt benefitted two local charities – the Maranatha Children’s Home and Protea Place of Safety.

“We also arranged an outing to the festival for the kids, so they could take part in the hunt and enjoy a bit of the Splash themselves.”

The focus on the youth continued as up-and-coming swimmers in the Masakhana Future Stars development programme competed in the 1km Izani Siqubhe open-water event alongside eventual winners Rok Kerin of Slovenia and Dominique Dryding from Cape Town.

Van Eck said on Monday festivalgoers could look forward to the King and Queen of the Bay and Die Burger WWP Wrestling events, while Dr Victor and the Rasta Rebels are set to close the festival on a high note at 2pm. 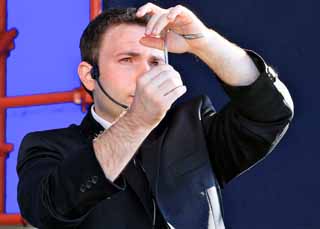