From its first tottering steps as part of a small local festival, the Nelson Mandela Bay Splash Festival has matured into a multi-faceted showcase of local, national and international entertainment acts and sporting events.

The 21st edition will take place at Hobie Beach in Port Elizabeth this Easter weekend and visitors can look forward to an action-packed programme, which includes food and craft stalls.

“This is the coming of age party for the Nelson Mandela Bay Splash Festival,” said CEO of Nelson Mandela Bay Tourism (NMBT) Mandlakazi Skefile. “The fact that it can pull big names like Justin Hines is testament to its standing as an event.”

Skefile said it made sense for the metro and NMBT to support events like the Splash Festival on a continuing basis because of the long-term social and economic spinoffs.

One of the festival’s main social beneficiaries is the Community Chest, which receives the proceeds from the sale of stalls each year. Last year’s donation of around R70 000 was distributed among 80 charities throughout Nelson Mandela Bay.

“Festivals and events like Splash are about creating a vibe for citizens and developing seasonal attractions that draw people into the city,” said Skefile.

According to her, the Splash Festival had become a tourism attraction that visitors could bank on when planning their April family holiday.

Festival director Glenn van Eck, who has been involved with the event since its inception, said it started out as the Harbour Splash – part of the now-defunct PE Festival.

He said the first official Splash Festival in 1990 was the brainchild of Shaun van Eck, then PE’s tourism chief. It was moved to King’s Beach and comprised a single stage for entertainment, a few stalls and a volleyball court.

“What we forgot was that the tide swirls in from behind and the beach was quickly flooded,” recalled Van Eck.

“There we were, four people standing knee-deep in the water, trying to challenge the sea with spades – we lost that battle.”

As a result, the festival was moved to Hobie Beach the following year, which was then still under development. That event was not without its share of drama, as the Windy City lived up to its name and a galeforce wind ripped the roof off the main stage – no-one was injured.

The 1990s saw the introduction of watersports and the ever-popular Food Village.

“By the time we celebrated our first decade,” according to Van Eck, “the festival had streamlined its three-pronged approach of entertainment, watersports and stalls.”

In 2008, the event moved to the harbour but the change of venue saw a drop in attendance figures.

The following year, the contract was put out to public tender by the municipality and awarded to the consortium of Magnetic Storm, headed by Van Eck, Zports and Frontier Events.

“We immediately set about revising the entertainment programme with families in mind,” said Van Eck. “We also spent a lot of time upgrading the stalls.”

Van Eck said they placed a strong emphasis on beach and aquatic events in line with the metro’s stated intent to market the city as the Watersports Capital of Africa.

“Splash will always stay a family-friendly festival,” said programme co-ordinator David Limbert. “We try to mix it up a bit, bring in something different, something people haven’t seen before.”

To this end, the festival has seen entertainment acts over the years ranging from the hilarious to the bizarre. “We’ve had bodybuilders and strongmen, knife-throwing acts and stunt riders – even circus acts like chimpanzees and trapeze artists.”

Limbert said giving exposure to local performers and unearthing talent was extremely important to the organisers. He said the Bay FM Search for a DJ competition was one of the ways they achieved this goal.

“As another example, we’ve had local boy Michael ‘The Fly’ Arthur sharing the stage with Barry Hilton at the event’s Comedy Festival, and bands like The Finkelstiens and Evolver One have gone on to make it big after appearing at Splash.”

He said a look back at the festival would not be complete without a mention of Little Gerry, the clown, who passed away last August.

“He was one of the family – Gerry did between 15 and 20 Splash Festivals. When the kids who loved him grew up, they’d bring their own kids to see him.”

This year’s line-up of entertainment acts features big names like Hines, homegrown R&B star Loyiso Bala and Dr Victor and the Rasta Rebels, as well as a variety of local Afrikaans, gospel and hip-hop performers and an appearance by the Watoto Children’s Choir from Uganda.

There is a host of kids’ entertainment including Bellino the magician, Puddles the clown and the theatre production Peter Pan and the Pirates – presented by Stageworld Theatre School. For the grown-ups, the expanded Lifestyle Village offers delicious deli-style foods and high-end handcrafted goods.

The King and Queen of the Bay, SA Jetski Championships and regional P750 inflatable boats round out the action.

The Algoa FM Fireworks will light up the night skies on the Saturday from 8pm. 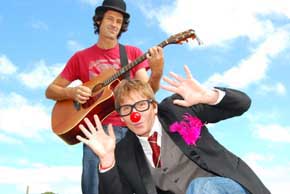