Four-time Subaru sani2c winner Kevin Evans announced last night that he will be making his competitive comeback at the three-day KwaZulu-Natal event that starts on May 19.

Team 360 Life’s Evans (32) and team-mate David George (35) were considered the best hope for an all-South African win at this month’s Absa Cape Epic – until Evans fell and broke his collarbone during the first stage.

The injury was a major disappointment to the four-time national marathon champion, who suffered an earlier setback in December when he had to undergo emergency surgery for a perforated appendix.

Evans said there had been some minor complications from the fall because he already had a plate in that shoulder from a similar break 10 years ago. Despite the fact that the bone had become quite brittle, the plate was successfully replaced and additional screws inserted.

Following a visit to the radiologist on Friday, Evans said everything “looked good and in place” but confirmed last night that he had been advised to pull out of the Fairbairn Capital/Old Mutual joBerg2c, which he had been planning to ride from April 29 to May 7. His withdrawal also sidelines George.

“Missing joBerg2c is quite upsetting,” said Evans, “part of me still says take a chance and do it.”

He said the 900-kilometre race would have been part of his preparation for the world marathon championships in Italy in June.

“Ironically, the enforced break has put me in a good position. I’ve had more rest than in the past six seasons and will be fresher for worlds.”

He said his sponsors had been very supportive. “It’s great to know that I don’t have to take risks to perform.”

The rider, who is based in Plettenberg Bay, said he anticipated a quick recovery of form. After 10 days of rest, he resumed training on a stationary bike last week – with one arm initially in a sling.

He trained on his road bike yesterday and although his collarbone passed the test, he felt the mountain bike might just be too great a risk at this stage.

According to his team, Evans might support George in the MTN series race in Tulbagh in mid-May as a test-run for the Subaru sani2c, where they plan to make a competitive bid for the title.

“I’m looking forward to the sani2c – it’s a lovely event and I’ve had a good run,” said Evans, referring to the fact that he’s won it every year he’s entered – each time with a different partner.

This year will be the first time he defends his title with the same team-mate. 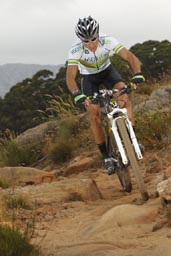 Four-time Subaru sani2c winner Kevin Evans (Team 360Life) will be making his competitive comeback following a broken collarbone when he defends his title alongside team-mate David George from May 19. Photo: Gary Perkin