In what promises to be a formidable partnership, Lill will be riding alongside former national cross-country champion Brandon Stewart (29). The team's entry is sponsored by FedGroup.

“It has always been in the back of our minds to do something like joBerg2c,” said Lill. “We’ll go in with high objectives – to win – because if you shoot lower, you won’t perform.”

The 28-year-old, who spent four years competing in America, returned to the local scene this year after Pegasus, his intended Australian outfit, was refused a pro-team licence by the International Cycling Union (UCI) in December.

Lill quickly validated new sponsor DCM’s faith in him by claiming the national champion’s jersey in his first race for the team in February. He was also the only South African to win a stage in the inaugural Cell C Tour of South Africa two weeks later.

“I trained really hard. It was a great way to start the season after the disappointment with the whole Pegasus thing.”

The Capetonian, who is renowned as a strong climber, said many of the road championship courses did not suit him as the distances were too short and favoured sprinters.

“In my opinion, there’s not enough racing on the road, while the mountain biking side is really taking off and offering more in terms of tours,” said Lill.

“I think the joBerg2c will be a tester – part of me thinks it’s time for a bit of a change, if only for a season.”

In terms of local road racing, he said he had few objectives left to achieve and that mountain biking was looking increasingly attractive.

“I’ve heard the course has lots of great single track. It’s not overly technical, so it could be a good transition race.”

According to Lill, mountain biking was becoming a viable professional option as the smaller teams were “less admin” for team owners. “Races like the joBerg2c are becoming solid events with good media exposure for sponsors.”

He said he was looking forward to “a new and exciting challenge” and that the time spent riding long road tours overseas could give him the edge.

“Between Brandon and myself, we bring a lot of combined experience to the table – we complement each other’s strengths and weaknesses.”

Lill said he would have to follow Stewart’s lead in learning how to manage himself on a mountain bike, while his own touring experience would be useful in helping his team-mate pace himself over the 900-kilometre course between Heidelberg in Gauteng and Scottburgh in KwaZulu-Natal.

“Either way, we’re going to enjoy it.”

Lill said he and Pietermaritzburg-based Stewart would take the race “one step at a time” and, if all went well, would then decide whether to tackle the three-day Subaru sani2c through southern KwaZulu-Natal on May 19.

Lill will talk more about the upcoming race and his career on DStv’s Supercycling show on Tuesday evening. 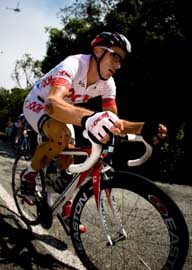