Durban lifesaver Luke Nisbet showed his endurance and tactical acumen when he won the King of the Bay elimination swim for the second year in a row at the Nelson Mandela Bay Splash Festival on Easter Monday.

After four elimination rounds of 500 metres each in flattish surf off Hobie Beach in Port Elizabeth, the race came down to a four-man shootout in the fifth.

In the final, the champion took the initiative going out, but Kerin dragged himself into contention with a powerful display beyond the breakers and around the turn.

Nisbet’s speed in the surf on the return trip was however too much for the Slovenian to handle.

“The surf lifesaving definitely helped me coming in and going out,” said Nisbet. “I knew Rok would catch me around the cans – so the beach couldn’t come soon enough.”

Nisbet said the relatively small surf meant that a good start was imperative. He took full advantage of the swells in round one, porpoising through the waves to shoulder out Kerin.

Kerin issued a strong challenge in the second heat, surging ahead late to take the win. Nisbet came back to win rounds three and four – and then ultimately the final.

Capetonian Dominique Dryding (18) – who had also won the Bell Buoy Challenge, Izani Siqubhe swim and Dash for Cash over the weekend – placed first in all five rounds for a dominating victory in the women’s race.

“The plan was not to go out too hard and to get into a rhythm,” Dryding explained her tactics afterwards.

Nisbet and Dryding also proved peerless in the Malibu board event that formed part of the King of the Bay challenge.

The KwaZulu-Natalian beat out his brother Adam (22) and Lyle Maasdorp (24) of Fish Hoek while Dryding edged out the Billson sisters, Lauren (16) and Carmel.

The men and women’s beach flags and sprint events were won by PE lifesavers Travis James (17) and Mandi Maritz (20).

At the recent national surf lifesaving championships, Maritz took gold in the beach sprint and silver in the flags. 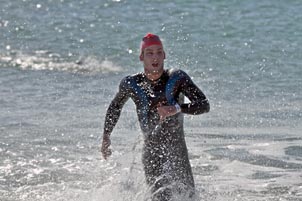