World Series and national champion Dawid Mocke claimed a hat trick of titles by the narrowest of margins when he won the Surf Ski Classic at the 21st Nelson Mandela Bay Splash Festival in Port Elizabeth on Friday.

Mocke was chased all the way by fellow Capetonians Jasper Mocke (25) and Tom Schilperoort (24) in the gruelling 26-kilometre event that took place in near-perfect paddling conditions off Hobie Beach.

Mocke and Schilperoort exited the water shoulder to shoulder with the 33-year-old (1:52:23) outpacing his younger rival (1:52:27) in the final dash to the line.

“It could have gone either way – Tom had a great race,” said Mocke, who said beforehand he wanted to assess his fitness levels. “It was quite tactical – we tested each other the whole way.”

The triple champion said he was pleased to defend his title although he did not feel as strong as in previous years. Mocke said the younger paddlers pushed hard from the start.

“There was a very irritating side wash on the way up to the boiler near Cape Recife and Tom and I just used the conditions a little better than the others.”

Mocke said he tried to lose Schilperoort at that point but the latter managed to hang on.

“We were both catching waves when we got to the end. I caught a good little bump – I guess choosing the right one just comes down to experience.”

Mocke said he was grateful for the organisers’ decision to change the course due to prevailing wind conditions.

Watersports coordinator Michael Zoetmulder said they had done so in order to “give the paddlers a long run (from King’s Beach to Cape Recife) with the wind at their backs”.

In the women’s race, Plettenberg Bay’s Beijing Olympian Michéle Eray (2:09:01) hardly raised a sweat in making it three titles on the trot.

She claimed an easy victory over fellow Olympian Nikki Mocke (2:18:18), who is on the comeback trail after breaking her foot earlier in the year. PE’s Kirsten Wessels (2:34:16) took the final podium spot.

“The conditions always seem to be unbelievable in the Bay – there were even dolphins at the start,” said Eray, who won the Perth Doctor World Cup race in Australia in January.

She said the win forms part of a solid weekend of racing – Eray will compete in the singles and doubles events at the Pennypinchers Easter Surf Ski Challenge in Plett on Saturday and Sunday.

In the doubles, the first men home were Durban siblings Adam and Luke Nisbet (2:03:19).

The hometown pairing of Stuart Laing and Kerry Louw (2:04:26) took the honours in the mixed with East London’s national paddler Hennie Roos (2:05:48) winning the vets section. 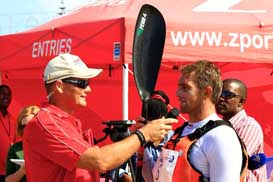