With last year’s sponsor once again throwing its weight behind the event, it’s all systems go for the second edition of South Africa’s longest full-service mountain bike stage race.

One of Old Mutual’s premier investment offerings, Fairbairn Capital, has recommitted itself as title sponsor of the Fairbairn Capital/Old Mutual joBerg2c on the strength of the highly successful inaugural race.

“An organisation like ours is obviously looking to partner with a premier event, which is run in a manner that is unquestionably professional,” said Fairbairn Capital general manager Stuart Loxton. “This race has delivered on every expectation that I’ve had.”

Loxton said another motivating factor was that race participants were a perfect fit with the company’s investor profile.

“Mountain biking is one of the fastest growing sports worldwide, attracting individuals with significant amounts of discretionary money,” said Loxton.

“Because Fairbairn Capital’s products are geared towards the affluent market, we believe we can add significant value to the financial plans of these individuals.”

Loxton said he had great faith in the event organisers, who are also responsible for the world’s largest full-service race – the Subaru Sani2c.

Craig Wapnick, one of the organisers, said there was little doubt that having Fairbairn Capital/Old Mutual as title sponsor added enormous credibility to the race.

“Riders feel they are part of something important when they see there is a powerful and reliable sponsor backing the event.”

This year’s Fairbairn Capital/Old Mutual joBerg2c takes place from April 29 to May 7. It will see approximately 300 two-man teams embark on an epic nine-day off-road journey of over 900 kilometres across South Africa.

“It’s about pure mountain biking – from Heidelberg south of Johannesburg to Scottburgh on the KwaZulu-Natal coast,” said Wapnick. “It’s also about sharing the spirit and the experience with rural communities.”

According to Wapnick, the enthusiastic involvement of the farming communities – and especially the landowners who allow the trails to be built across their farms – is one of the key features of this cross-country adventure.

He said an event of this nature is a cost-intensive exercise, but worthwhile from a community development perspective.

“We believe in paying everyone for their efforts – especially the schools, churches and associations that run the nine race villages and water points along the route,” said Wapnick.

“Without a sponsor it would not be viable for anyone at the entry fee we charge.”

Wapnick said Fairbairn Capital’s generous sponsorship had allowed them to offer a substantial prize purse as incentive to the country’s top professional riders.

The company will also be sponsoring approximately 40 riders, including members of the media, clients, employees and celebrity guests.

For more information on the race, visit www.joberg2c.co.za. 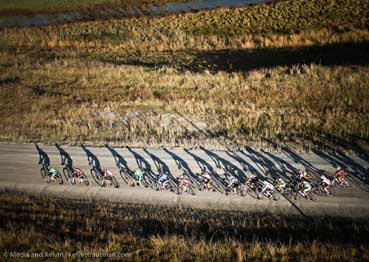 The peloton en route to the coast during the inaugural Fairbairn Capital/Old Mutual joBerg2c. Photo: Media and Kelvin/Kelvin Trautman