Aspiring professional DJs will get a chance to mix it up in the third annual BayFM Splash Festival Search for a DJ talent competition.

The final rounds will take place in front of a live audience at the festival, which takes place from April 22 to 25 at Hobie Beach in Port Elizabeth.

A component of the Nelson Mandela Bay Splash Festival’s community upliftment programme, this competition – open to entrants aged 18 to 25 – has been responsible for creating a serious pool of emerging talent on the local club scene.

“We’re looking for the next big thing,” said BayFM’s Greg O Gee, the event coordinator. The community radio station is the only one in the Eastern Cape that has an in-studio DJ set-up for live on-air sessions.

O Gee said the talent search was a platform for finding new club, rather than radio, DJs. “It’s about developing skills and creating serious career opportunities.”

He cited the success of DJ Spectrum, who won the first talent competition and is still resident at The Godfather two years after taking up his prize of a three-month club contract. “It has become a permanent source of income for him.”

O Gee said he hoped the competition would help to change public perceptions of DJing. “In the past, DJs operated like a spaza shop – we want to equip them with the skills to run a proper business.”

The winner’s prize package, worth a total of R60 000, would go a long way to achieving this, O Gee said.

According to O Gee, the winning DJ will take home a complete sound system, including powered subwoofers and tops, CD players, mixer, headphones and LED lights, as well as a laptop, printer and hard drive.

“He or she will sign a three-month contract with a PE nightclub and also play BayFM’s Friday night ‘20-20 sessions’ for three months.” A business banking account, weekend away for two, soft drink hampers and meal vouchers complete the prize offering.

The competition kicks off with an introductory session on March 7. Contestants then enter an elimination round where their 20-minute demo sets will be judged on technical ability, originality and performance behind the decks.

Those who survive will compete in a club tour, playing at DNE (Friday, March 18), Jubilee (Saturday, March 26) and The Godfather (Friday, April 8).

From there, the top eight DJs will be selected to perform at the Nelson Mandela Bay Splash Festival on Friday, April 22, and Saturday, April 23. The top two performers on each night will proceed to Sunday’s final, when they will entertain the crowds and compete for the judges’ votes.

“I think DJ Jay is most likely to be Mr Nasty,” said O Gee.

To prepare them for the big event, semi-finalists will attend the DJ Boot Camp on April 17 and receive training from On Cue, the city’s only DJ school.

“Even if they don’t win the competition, the workshop will equip these young DJs to run their businesses as independent entrepreneurs,” said O Gee. 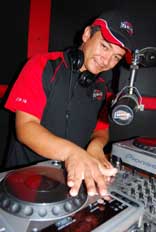 DJ Greg O Gee warms up the decks in the BayFM studios ahead of the BayFM Splash Festival Search for a DJ competition. Photo: Full Stop Communications