The opening match of the tournament, played between hosts South Africa and Mexico at Soccer City in Soweto, was beamed live to St George’s Park where fans watched it on a screen measuring 75m².

After a goalless first half, scenes of pandemonium broke loose when Bafana Bafana’s Siphiwe Tshabalala found the back of the net in the 55th minute. By the same token, one could hear a pin drop when Mexico equalised just over 20 minutes later. 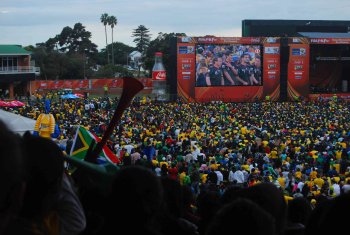 When the match kicked off, a total of just over 20 000 people had already passed through the turnstiles, according to FIFA Fan Fest™ director Glenn van Eck.

“If one considers the weather, one must be happy with the turnout,” said Van Eck, referring to the overcast and cool conditions. “The atmosphere in the stadium was fantastic.”

He said it was evident that the entire city had embraced the World Cup. “The audience was truly representative of the Rainbow Nation and I enjoyed the way fans went onto the field to share in the vibe.”

Van Eck said there had been no reported incidents. “We did experience minor technical difficulties with the sound feed from Johannesburg, but it did not seem to detract from the crowd’s enjoyment.”

With three matches being broadcast on Saturday, of which PE is hosting the first (Korea versus Greece at 1.30pm), he expected another good turnout. The games between Argentina and Nigeria and England and the United States start at 4pm and 8.30pm respectively.

Van Eck urged fans to come early to allow enough time for the compulsory security checks. He reminded people not to bring food, drinks and other banned items.

“There are more than enough vendors at the Fan Fest and the selection caters to a wide variety of tastes.”

Van Eck said a mix of local artists would keep attendees entertained between matches and entrance was free.

CAPTION: Fans turned out in their droves to watch the opening match of the 2010 FIFA World Cup™ at the FIFA Fan Fest™ in Port Elizabeth. Photo: Full Stop Communications