With the Nelson Mandela Bay Stadium’s first FIFA World Cup™ match done and dusted, fans are expected to shift their focus to the FIFA Fan Fest™ at St George’s Park for the remainder of the day.

More than 20 000 fans packed out the Fan Fest to watch the opening game between Bafana Bafana and Mexico last night and this afternoon’s programme comprises more five-star entertainment.

First up on the big screen will be the day’s second match between Argentina and Nigeria, which kicked off at 4pm. The day’s final game – between England and the United States – will be shown at 8.30pm.

A host of sponsors’ and other entertainment will keep fans entertained in-between the World Cup hype. 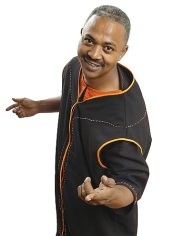 The first act to look forward to will be the collaboration between Port Elizabeth jazz artist Denzil Africa and the Vusa Band, who will provide their onstage magic from 7pm.

Through his performances, Africa pays tribute to the soul singers of past and recent times. As a singer, he offers distinctive musical harmony and, as a pianist, he truly challenges the mould.

The first national act of the Fan Fest will be the internationally acclaimed disk jockey, DJ Cleo, who will lead in the after party following the live broadcast of the football.

Apart from his personal exploits behind the decks, he is believed to be the most influential dance music producer in the country with a huge reputation in genres such as house, kwaito and hip-hop.

The Fan Fest, which is open on match days from 11am to midnight, also features a five-a-side football tournament and crafts. Entrance is free.