Another appetizing three-course menu of FIFA World Cup™ matches is on the menu at the Fan Fest™ at St George’s Park in Port Elizabeth today.

In addition the cherry – or cherries – on top will be the popular all-girl group Jamali, who will be entertaining the crowds at the Fan Fest tonight at 7pm.

The match between Algeria and Slovenia, which kicked off minutes ago, is the hors d’oeuvre to two other mouth-watering clashes that will be screened on the largest screen in the country today. 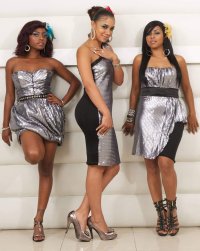 Next up, at 4pm, will be Serbia against Ghana, followed by Germany and Australia at 8.30pm.

The local hip-hop band, Epic, will take to the stage after the second match, followed by the day’s much anticipated national act, the all-girl group Jamali.

The latter shot to fame after finishing second in the Coca-Cola Pop Stars national talent search in 2004, releasing their debut album, Jamali, shortly after.

Since then they have secured a loyal fan base after the release of their two hugely popular albums – Yours Fatally in 2006 and 3rd base in 2008.

Their music – a mix of Zulu and English – is mostly R&B, but ventures into the Afro-pop genre.

Five-a-side football opened the day’s proceedings with the Slo Foot Jazz Band setting a true Sunday mood in the lead-up to the first game.

The Fan Fest is open on match days from 11am to midnight. Entrance is free.