The Madibaz beach volleyball teams are planning to use the University Sport South Africa tournament in Gqeberha to ignite the sport in the region.

Nine universities will compete in the competition at Kings Beach in Humewood from November 29 to December 1.

“It is only the second USSA tournament that Madibaz will be attending and we are determined to put in a concerted team effort,” he said.

“Unfortunately the sport is not that big in Nelson Mandela Bay but we feel that hosting the tournament will provide great exposure and that it will drive a desire to grow the discipline here.”

Nelson Mandela University’s most experienced player Bologo Moloisi said she hoped they could transfer some good performances by the women at the USSA volleyball week to the beach version of the game.

“It has been a while since we participated in the USSA beach volleyball tournament but the ladies were competitive at the volleyball event so our focus will be to continue to do better and to aim for more,” she said.

“The weather in coastal conditions is often a challenge but we are excited about this opportunity as we haven’t had many chances to prove ourselves at beach volleyball.” 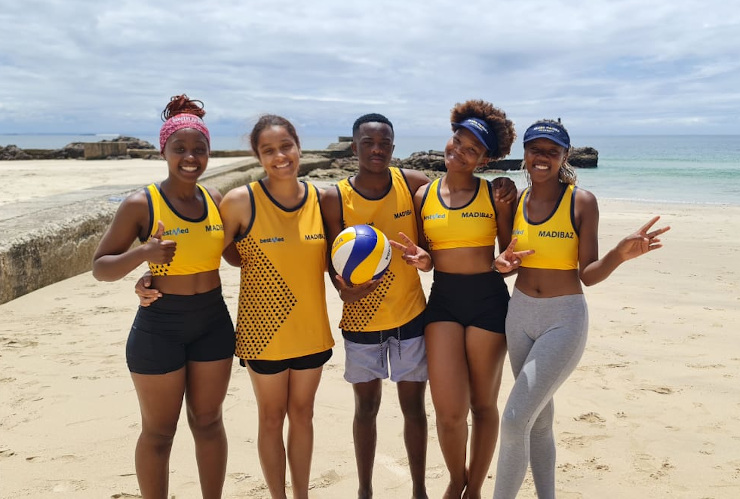 Moloisi felt that having a positive attitude would play as big a role as the physical training.

“We have been working hard at least twice a week, doing passing drills and ensuring that we have the necessary fitness – not only physically but mentally as well.”

Petersen said Madibaz’s biggest challenge would be to perform as a unit as they attempted to match the more established sides. As many of the players were novices at USSA level, he said a strong sense of self-belief would be important.

He also felt that the quicker they could get used to the beach conditions, the better they should perform.

“For us, there will definitely be a big focus on a team effort and this will be an excellent opportunity for our players to gain further experience.”

Petersen felt it would be good for the development of the fledgling sport if a beach court could be established at one of Nelson Mandela University’s campuses in the future.

“At the moment, depending on the weather, we set up a court at Kings Beach on Saturdays to get in our practice sessions.”

He confirmed that everything was on track for the arrival of the country’s best beach volleyball players.

“We have secured the venue and set up the necessary logistics for what we are sure will be a successful event,” he said.

The men’s and women’s teams will compete in a round-robin format over the three days.

Petersen said the University of Western Cape were always among the frontrunners and suggested they could again be tough to beat.