Madibaz must be clinical in execution in Grand Challenge final

Madibaz captain Leon van der Merwe said they would have to capitalise fully on any opportunities when they take on the formidable Progress outfit in the Eastern Province Grand Challenge rugby final on Saturday.

The showdown for the province’s premier club title will take place at a neutral venue and comes after the Nelson Mandela University outfit edged Harlequins 20-16 in Saturday’s semifinals.

Progress overcame Jeffreys Bay 37-19 to clinch their place in the competition decider.

Van der Merwe, who plays eighthman, said they always knew it would be a tough encounter against Quins, but that they were confident of success.

“Our ability to stay calm and trust our systems came through when we were 13-3 behind in the first half,” the skipper said. “But we didn’t panic and managed to fight back.

“We had to grind through tough moments in the game and made sure we capitalised when we had momentum.

“We knew that if we stayed disciplined on defence, we could force a handling error or turnover and then use the possession to advance up the field and to play in the right areas.”

He felt they would need to repeat this strategy against Progress, who have been one of the leading Eastern Cape club teams in recent years. 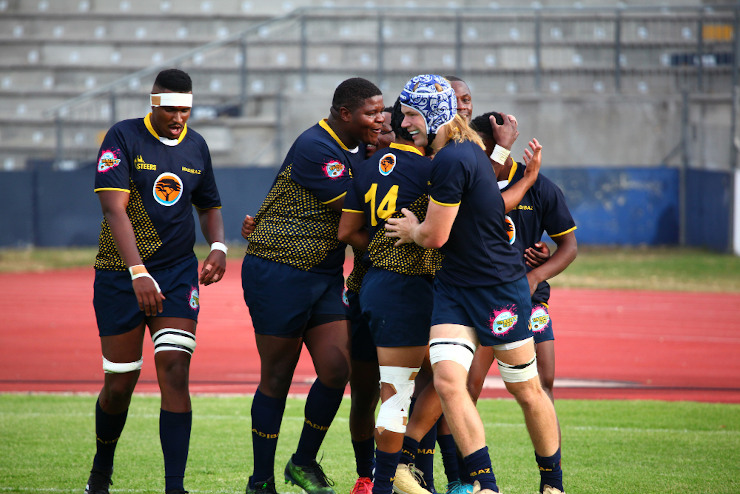 Madibaz rugby captain Leon van der Merwe (with cap) celebrates a try during an FNB Varsity Cup match earlier this year. On Saturday, Van der Merwe will lead the students in the Eastern Province Grand Challenge final against Progress at a neutral venue still to be announced.

“Progress are a very good side with some dangerous runners,” said Van der Merwe.

“We know we are going to have to be at our best to beat them and will have to be clinical in our execution.

“They don’t give opponents many opportunities, so when an opening does arise, we will have to be sharp and take it with both hands. It’s going to be important for us to take all the points on offer.”

While it has been a massive team effort, Van der Merwe said several players had stood out in the journey to the final.

“Kyle Cyster has been exceptional for us at fullback – he is a real game-breaker and an important part of our team.

“Also, Troy Delport has been immense for us at inside centre with his strong ball carrying and flank Dylan Halgreen has been our lineout ace and a destructive runner.”

He also praised the input of coach David Manuel, who linked up with Madibaz at the end of last year.

“He has started something special at Madibaz Rugby, and I’m extremely excited to be a part of the journey and to see the heights he is going to reach with our club.”

Manuel, meanwhile, believed their progress this season had been significant for the growth of the club.

“This is massive in terms of rebuilding the rugby club,” he said. “Self-belief is so important in this sport. Hopefully we can leverage this experience.”

Van der Merwe outlined their goals for the Grand Challenge as building a winning culture, solidifying processes, having clarity of roles, becoming mentally tougher and to grow combinations and determine which players they could take forward.

“I’m happy for the players, management and the organisation,” said Manuel. “They have been through a lot and hopefully this will be some sort of reward and bring purpose to the hardship they have gone through.

“The players have grown across the board and we are very proud of them. We have a saying ‘when the tide rises, all ships rise’ – we all do our part, so everyone looks good.

“Thank you to management who have worked tirelessly behind the scenes to keep the ship moving in the right direction.”

The Madibaz mentor was under no illusions about the challenge which loomed this weekend.

“It is going to be tough. Progress haven’t lost a game in four years and we must respect them in the way we prepare this week.

“We will leave no stone unturned and the players are excited for the challenge, which is good.

“Our approach will not change. We will focus on our gameplan and trust our processes. We are not a fancy team and our systems make us strong.”