The Association for Persons with Physical Disabilities in Nelson Mandela Bay aims to celebrate the 10th anniversary of SPAR Wheelchair Wednesday by expanding the campaign next year.

The APD and SPAR Eastern Cape completed the 2020 programme yesterday with the annual handover of wheelchairs at the Nelson Mandela Bay Stadium, albeit with a greatly reduced attendance due to Covid-19.

APD chief executive Cecilia Fourie said they were thrilled with this year’s roll-out during a time of uncertainty. She said a further 200 beneficiaries had received wheelchairs.

“Even though we started two months late, it was another highly successful project and we were able to reach all our targets,” she said, adding that the 2021 event would be a special one as the organisation had an opportunity to do a roll-out in Kirkwood.

“We are very excited to be able to expand it outside of Nelson Mandela Bay as part of our 10-year celebrations.”

Fourie said another area of focus would be to take its association with the Amputee Support Group (ASG), which offers counselling and material support to amputees and their families, to the next level.

In its first year of involvement, the ASG received a donation of five pairs of crutches and three wheelchairs.

SPAR Eastern Cape promotions and events manager Alan Stapleton said the retailer was both humbled and proud at what had been achieved, especially being able to roll out the programme amid trying circumstances. 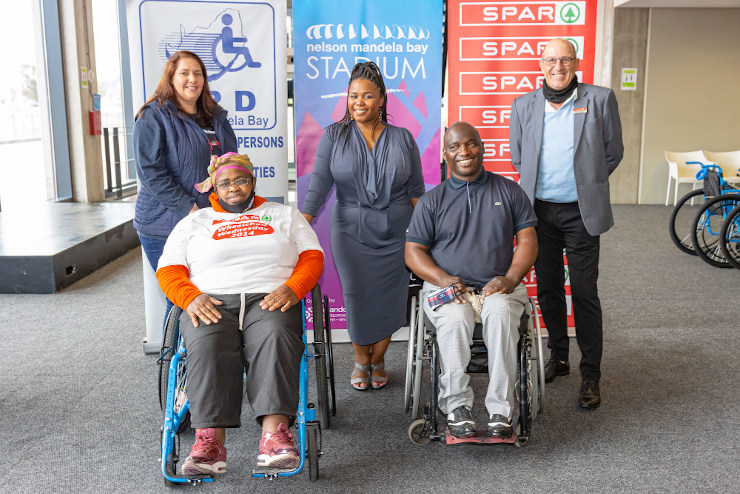 “One of SPAR’s mantras for 2020 was by embracing – how ironic – tomorrow we can be better together.

“Wheelchair Wednesday has done just that. This small contribution has changed our lives, but it will make a massive difference to the lives of the beneficiaries.”

He added that the company was privileged to work with “an amazing team of passionate people from APD”.

“This organisation was robbed five times during lockdown, but they never let up – their commitment is amazing.”

Yesterday’s ceremony was closed with three powerful, motivational talks from beneficiary Nthombizetu Soya, amputee triathlete Stan Andrews and Brett Marshall, who was crippled by a spinal injury in a schoolboy rugby accident.