Despite the challenges dished up by the Covid-19 pandemic, the Association for Persons with Physical Disabilities Nelson Mandela Bay is thrilled with the outcome from this year’s SPAR Wheelchair Wednesday campaign.

In terms of the support received from corporates and its objective of raising awareness about conditions which wheelchair-users face, APD chief executive Cecilia Fourie said it was another resounding success.

The end goal, she added, was to donate 200 wheelchairs to needy beneficiaries in the Nelson Mandela Bay area.

“When you consider the waiting period to get a government-sponsored wheelchair is between one and three years, it makes it even more special to know that we could change the lives of 200 vulnerable people.”

Fourie said the campaign was also focused on raising awareness of wheelchair-users’ needs at businesses and shops, recommending changes regarding accessibility and raising funds for the APD’s Ability Work Centres for persons with disabilities.

“As we reflect on this year’s campaign, we can safely say that we have definitely achieved all our goals and targets.”

Making a difference in a year which seldom went smoothly was the co-operation they received from the business sector and members of the public, she added.

“As time went on and we faced the reality of the pandemic, the disastrous effect it had on all spheres of the business sector was clear. But we are absolutely blessed and honoured by the fact that everything went according to plan. 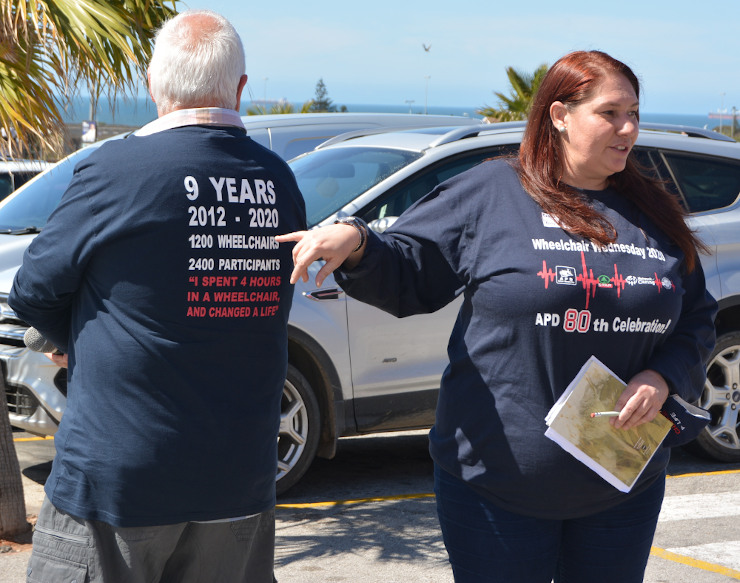 Cecilia Fourie, chief executive of the Association for Persons with Physical Disabilities Nelson Mandela Bay, points out their targets for the ninth staging of the SPAR Wheelchair Wednesday campaign this year. Photo: Full Stop Communications

“The positive response we received from corporates and the public, who had the opportunity to spend four hours in a wheelchair and to work through the task sheet, was overwhelming. So many have already committed to support us next year.

“The project slogan – ‘spend four hours in a wheelchair and change a life’ – says it all. This is exactly the feedback we got from the participants.”

Fourie pointed to a number of tangible changes that have been inspired by Wheelchair Wednesday in its nine-year existence.

“The project has resulted in 1 200 wheelchairs being donated to needy persons in that time,” she said.

“In terms of accessibility, the vast improvements brought about in many local structures and the mindfulness of our citizens on simple matters like the importance of reserving parking bays for persons with disabilities are encouraging.

“On the fundraising front, APD provides work for 64 persons with disabilities at its Ability Work Centres. With monthly running costs exceeding R500 000, we need to reach out to businesses and individuals to secure our sustainability.”

The organisation’s social services department, she said, assisted more than 2 000 persons with disabilities and their families throughout the Nelson Mandela Bay region on an annual basis.

“It is not just the lives of the recipients which are affected but an entire family, especially those members who work closely with the recipients.”

Increasing the reach of the Wheelchair Wednesday campaign this year was the decision to link up with the Amputee Support Group.

“We were very fortunate to welcome them on board and we believe it will improve the awareness of the work this body does,” said Fourie.

“It was decided to place branded boxes at selected participative hosts where members of the public could donate their unwanted crutches or walking aids.”

She emphasised that none of this could have happened without the support of SPAR Eastern Cape and the Network of Caring.

“SPAR Eastern Cape, for the eighth year in a row, supported us as one of the loyal major sponsors and they have been amazing,” acknowledged Fourie.