Defending champion David Maree has the Takealot Jock Classic down as a priority for 2019, describing the three-stage one-day event as one of the premier cycling road races on the South African calendar.

Riding for the Enza team, the 29-year-old cyclist from Fourways in Johannesburg is relishing the challenge presented on Saturday by one of the country’s longest-running events.

Starting at Mbombela Stadium in Nelspruit, the 150km route will take riders through White River and Sabie before finishing back at the stadium.

“It is definitely one of the biggest events on the annual programme,” said Maree, “and the fact that is has been around for so long gives it top status.

“And it is a race that if you want to do well you have to put in a little bit more effort, coming at this time of the year.”

Having won his first Jock Classic title last year, he said the race would always have special memories for him.

“You always want to defend a title you have won before, so I am pretty motivated to do well again,” said Maree, who won the points race at this year’s SA Track Championships.

He admitted he had been struggling with “a bit of illness” recently, but added that their outfit had a few cards to play.

“Besides the illness my form has been pretty good. But we also have Steven van Heerden, who has been competing in America and is really strong at the moment.

“In addition our team includes a number of really promising young riders, so you may even see a surprise from them.

“Nolan Hoffman is also joining our team for this race and, although the route doesn’t quite suit his style as a sprinter, if he is in there at the end there will be some worried cyclists.”

The format of the Jock Classic throws up a different challenge, but that does not present a problem for Maree.

“Obviously the three stages mean you have to approach it slightly differently but I am one of those riders who are able to find a rhythm quickly so a race of this nature suits my style,” he said.

“The fact that you have to warm up for each stage does not particularly bother me as I can normally get going straight away.”

Even the morning chill of a Lowveld winter is not a problem for Maree.

“The beauty of it being a stage race is that you can layer up pretty well in the morning when it’s quite cold,” he explained.

“But once you’ve completed the first stage you can re-dress, as it normally warms up and the weather is pretty good during the day.”

With the experience of last year’s race fresh in the memory, Maree said he felt the second stage could be telling in deciding the final outcome.

“Every stage has a major focus point, with stage two being the most tricky.

“In the first stage, at just over 40km, most of the riders stick together and there’s normally a sprint finish at White River.

“Stage two is definitely the hardest of the three and you need to concentrate the whole way from White River to Sabie. If you lose any ground at this stage it will be difficult to make up on the last leg.

“The final stage does have the challenge of the Long Tom Pass, but I just break it up into sections. And I feel if I can stay with the front bunch until the top then I always have a good chance of winning.”

Late entries for the race will be accepted at registration on Friday at the Mbombela Stadium in Nelspruit from 2pm to 8pm.

For more details, go to www.thejock.co.za. 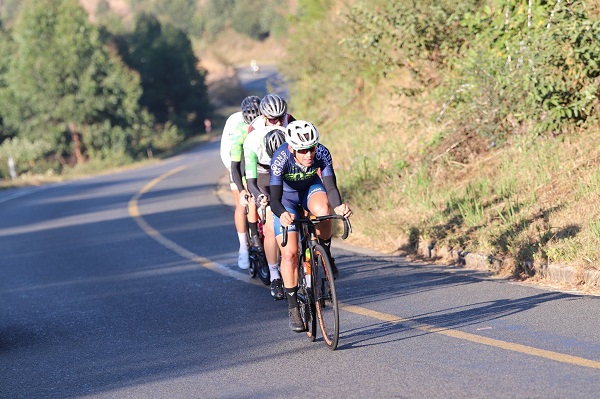 David Maree is relishing the prospect of defending his title when the Takelot Jock Classic road cycling race takes place in Nelspruit in Mpumalanga on Saturday. Photo: Sufiyan Malik (PPS for Professionals)