The University of Johannesburg women’s hockey team will be aiming to improve their finishing skills when they challenge for the University Sport South Africa title next month.

The annual tournament, which incorporates men’s and women’s sides, will take place at Stellenbosch University from July 1 to 5.

Earlier this year UJ competed in the women’s Varsity Hockey tournament and hockey manager Elize le Roux said they would try to implement some of the lessons learnt there in the USSA event.

“The one big thing that came out was that we need to make our opportunities count,” she said. “We were close in many games, but just lacked a bit of finishing.

“We know we need to stay focused on our game-plan and execute it for the full period of the match.”

A year ago the UJ teams finished fifth (men) and sixth (women) as they went through a rebuilding phase.

“It wasn’t our best, but we had young players and the opposition in this tournament is always tough,” added Le Roux.

“We are working towards making the semifinals and the ladies showed what they could do in the six-team Varsity Hockey, almost making the top four. Several results went down to the wire.

“For the men a top four spot would be realistic, but we still have a relatively youthful squad as we continue to build, so we will have to work hard for this.”

Le Roux said events such as USSA played important roles for both the varsity and the players on an individual level.

“We rely on good results to build our structure for hockey and, of course, we are competitive and like to win,” she said.

“But we manage our performance cycles around our intake and strength of players.

“We also want students to get the best exposure and student experience with events like these. Good results at a USSA event can help to secure the future of hockey at UJ.”

She added that the tournament provided a good barometer of their strength in relation to other varsities.

“It’s always handy to measure yourself against your contemporaries in a competitive environment, with all eight teams having a chance of doing well.

“For the women, the Varsity Hockey positions can give you an indication, but with players over 25 eligible for USSA, it will be tough all-round.

“Successfully getting through your pool matches is essential to having a chance later in the week as there is no quarterfinal option. So the results are important from day one.”

The men’s team, under the coaching of Garreth Ewing and Lance Louw, will have players such as Taylor Dart, Courtney Halle, Kyle Lion-Cachet, Andile Ndlovu, Spencer Botes and Che February leading the way.

Botes was the top goal-scorer at this year’s U21 interprovincial.

Women’s coach Tsoanelo Pholo will have a key role to play as she strives to lift the women’s outfit into the top four, with national representative Kristen Paton also an important member of the squad.

But Le Roux emphasised that nothing short of a team effort would be enough to reap any success for either squad. 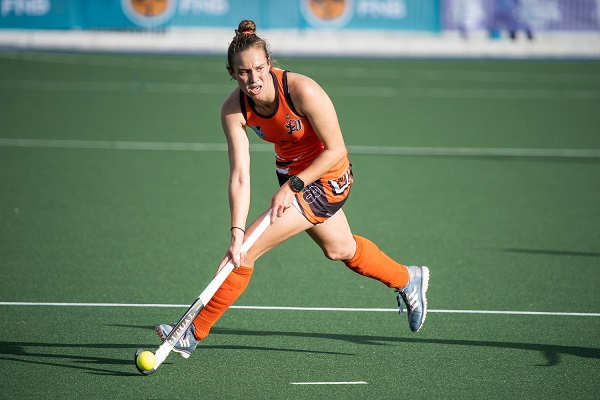 University of Johannesburg’s Kristen Paton will have an important part to play in their bid for the women’s title at the University Sport South Africa hockey tournament in Stellenbosch from July 1 to 5. Photo: Luke Thorrold