As an estate which prides itself on its natural vegetation, it is no surprise that the Sardinia Bay Golf and Wildlife Estate has embarked on a rigorous programme to remove alien species.

Under the guidance of general maintenance supervisor Hugh Wiblin the estate is focusing initially on removing rooikrans trees, which are native to Australia.

He explains that invasive foreign species usually grow faster than the natural vegetation, which means they start taking control of the environment and, in doing so, kill off indigenous plants.

“Alien vegetation generally has no natural predator and therefore, if allowed to flourish, it changes and damages the natural environment.”

Wiblin’s team will be looking at several factors in order to formulate an estate management programme, but for now the focus is on controlling alien vegetation.

Rooikrans has been identified as one of the biggest threats, but there is more to curbing the growth of this species than just chopping it down and dragging it out.

“We have to be very sensitive about the indigenous plants growing in and around these copses of invasive species. There are specific ways of dealing with it.

“For example, if you identify some rooikrans to be removed, what do you do if the area is surrounded by milkwood trees which you don’t want to damage?

“So what we do is go in and cut down the rooikrans as carefully as possible so as not to harm indigenous plants and then just let it lie there.

“Rooikrans does not regenerate once it is cut down, so it will just die away, leaving the natural vegetation to grow over it and reclaim the ground.

“Wherever the alien vegetation falls once it has been cut, we just leave it there and let nature take its course.” 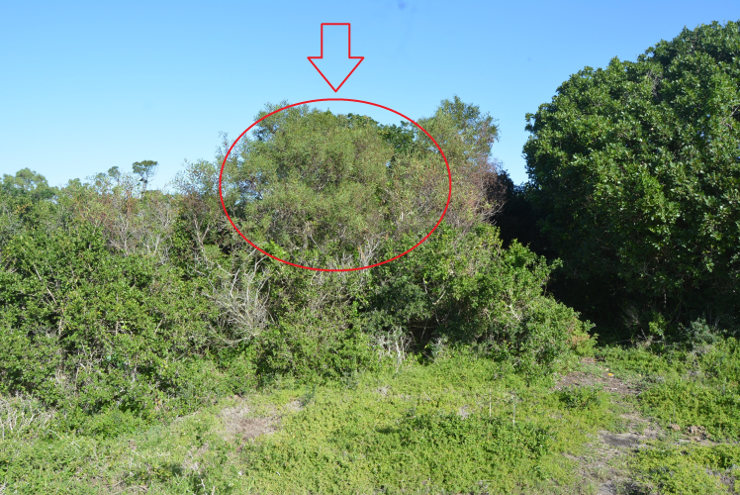 The Sardinia Bay Golf & Wildlife estate has introduced a project to eliminate alien vegetation such as rooikrans (area in red circle) on the 100-hectare property. Photo: Full Stop Communications