Pretoria mountain-bikers Philip Fourie and Francois Ebersohn led from start to finish to take the honours in their debut appearance at the Liberty Waterberg Encounter today.

The three-day race finished at Sondela Nature Reserve near Bela-Bela in Limpopo after covering trails which also traversed sections of the Elements Private Golf Reserve over the weekend.

They came home in the final stage ahead of Andre Gibhard and Lionel Scholtz (2:09:54) and Mark Prince and Michael Minnaar (2:10:05). The latter team were second overall, with Gibhard and Scholtz completing the podium.

Ebersohn said they were able to build a gap on the first day which they maintained throughout the event.

“Although we compete regularly in races we came into the event not knowing quite what to expect,” he said.

“In the first stage on Friday [over 57km] we were able to get away about halfway through and spent the rest of the race riding by ourselves.

“There were some testing sections because there was some ‘horizontal climbing’ through sections of sand as well as some rocky areas.

“But it was a good start and also included some memorable single-track sections.”

He felt the second stage of 46km stood out the most for them during the weekend, combining as it did great trails with excellent views of wildlife in the bushveld.

“Day two was absolutely fantastic. It was completely different to day one, with specially built single-track through some very nice kloofs and water features. Add to that the game we saw and it was spectacular.”

Although the 56km third stage had been billed as largely downhill, Ebersohn said a headwind coming back into Sondela had made it “hard, hard, hard”.

“But we did finish with a 15km stretch of wonderful single-track, so that made it a great experience.”

Having had a taste of the Waterberg, Fourie said they would definitely be back for more.

“It was very well organised, with excellent food and entertainment and a really nice vibe during the two nights at Elements,” he said. “It’s definitely a ride which you’ll want to do again.”

A special feature of the race, he added, was that it was manageable for riders at all levels.

“For example, it’s something you could do with your wife or a mate who might not be at the same level because although the stages can test you, they are short enough that you don’t spend your whole day on the bike.

“So there is the opportunity for a good ride and then a chance to enjoy the facilities on offer at Elements.

“It’s something we would definitely recommend to our mates.”

Yolandi Kotze and Alta Gosling were the women’s winners in 11:03:13, while Jacques Wentzel (7:43:27) won the solo men’s category, 10 minutes ahead of Francois Smith.

Killy Bacela, divisional executive of Group Brand & Integrated Marketing at Liberty, congratulated all the competitors on their efforts.

“It is inspiring to see the physical and mental preparation cyclists go through in order to participate in a gruelling event like the Liberty Waterberg Encounter Series,” she said.

“It takes commitment, training and the willingness to accept advice and support from team members, coaches and even medical professionals.

“That’s why we are honoured to sponsor this event, because at Liberty we understand the importance of preparation and advice in helping you live life to the fullest.” 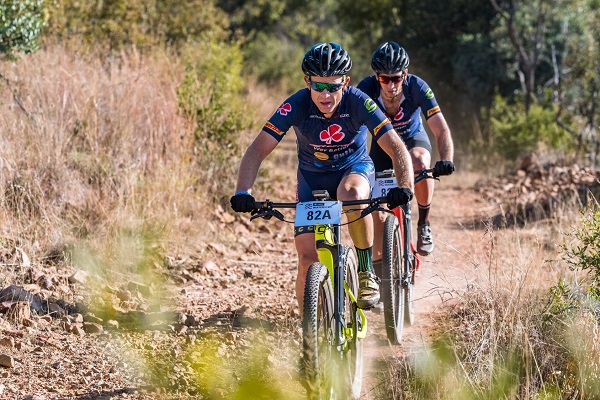