The Madibaz men’s basketball team have qualified for the University Sport South Africa national tournament this year after coming through to win the Eastern Cape play-offs.

The Nelson Mandela University squad played a double round of fixtures against Walter Sisulu University, Fort Hare and Rhodes, with the top two sides qualifying for USSA.

Madibaz basketball manager Bernard Petersen said they had achieved their goal, which was important to them in the long run.

“We are very happy with the outcome in what was a vital play-off tournament for us,” he said.

“Our aim is to try to do well at the USSA tournament to give us a chance of qualifying for the Varsity Basketball competition in 2020.”

The USSA tournament will be held at UCT in Cape Town from July 1 to 5.

Petersen said the squad would now turn their attention to the USSA event, which he described as “one of the most competitive tournaments in the country”.

“All the varsities take the USSA tournament very seriously as it plays a big part in deciding the Varsity Basketball representatives for next year’s competition.

“The top eight teams on the final log at USSA will qualify for the prestigious Varsity Basketball tournament and we will be going all out to achieve that goal.”

He added that newly appointed head coach from the university’s economics department, Dr Andrew Phiri, would have extra training sessions to ensure they kept performing at a top level.

“We are also planning to obtain the services of a biokineticist via the Madibaz High Performance Centre to keep the players in the best possible shape.

“The players have their academic responsibilities so that is always something we have to consider, but we will be doing all we can to make sure we are ready for USSA.”

Fort Hare University turned out to be their biggest rivals in the regional qualifiers, said Petersen.

“We played them on three occasions, winning two games and losing once.

“The final game was an epic encounter, because it also counted for the Eastern Cape Championship.

“We took the gold medal in this tournament by defeating them in a thrilling match on their home turf with a final scoreline of 71-67.” 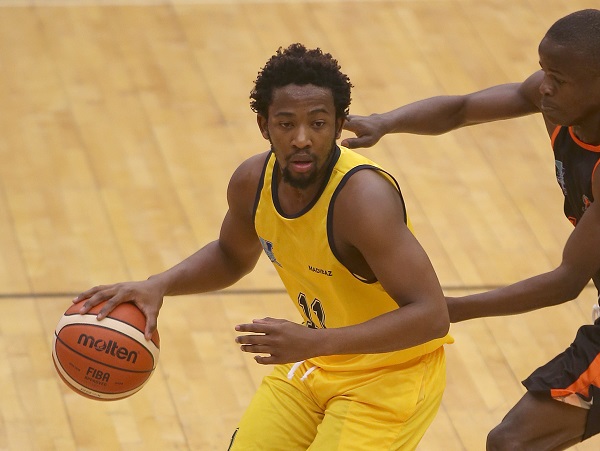 Madibaz player Elton Rebaone will have an important role to play when the squad compete in the University Sport South Africa tournament in July. Photo: Reg Caldecott