A dedicated work ethic allied to massive support from varsity structures has seen the University of Johannesburg women’s rugby players start to make a major impact on the sport.

The squad, who are currently touring France, have a number of national players in their ranks, with several others on the fringe of recognition at the highest level.

Team manager Tumi Leseke said many aspects had contributed to the growth of rugby at UJ, not least of them the commitment of the players and the array of support staff in place to ensure all their needs are met.

“The university has played a huge role in the system we have put in place,” said Leseke.

“We have access to biokinetics staff as well as physios in order to aid recovery processes when players get injured.

“We also pride ourselves in creating and enhancing pure athletes with the help of our sports science department, notably the team’s own sports scientist Liphiwe Nxasana.

“She goes above and beyond for the girls, creating workout programmes that not only enhance the players’ performances but which set them apart from the rest.

“Liphiwe works hand in hand with each athlete to bring out the best in everyone and the team is richer for it.”

Leseke also highlighted the role play played by coach Mbuyiselo Siqebengu, who has experience of sevens rugby at the highest level.

She added that the system worked because of the backing of all the relevant university departments.

“Our success is not a fluke but a representation of the hard work we put in, day in and day out.

“It is testament to the fact that when you put your full support behind a women’s team they will show you results.”

Besides the international players who have come through their ranks, Leseke said women’s rugby had grown across the board.

“In 2013 we could barely field a team of 15 and had a total of five women in the gym programme as well as having only four girls in the provincial set-up.

“The only tournament we could look forward to was the USSA sevens event.

“In 2019 we have doubled that number of players, as well as having eight of our members in the provincial structures as players or management.

“The number of ladies we have filtered through our system and who have made it for national team selection has grown. This includes the SA Students team and the Blitzboks at an U20 and senior level.”

Among the players to excel, she said, was Voice Ndou, who went to the HSBC Sevens in Dubai in December and will represent the SA Students at the World Student Games in Italy this year.

“Our newest player is Catharina Jacobs, who is touring Europe with the Blitzboks squad and played in the Centrale Sevens tournament in France last week.

“We also have another national member in Ayanda Malinga, who has represented the Blitzboks and is now a regular in our team.

“The U20 Springbok camp is being held this week and our newest recruits, Nthabiseng Ncalane and Luzetha Zulu, are there to show the coaching staff exactly what they’re made of.”

The UJ team won the inaugural Jozi women’s league and will attend the club championships in Cape Town, said Leseke.

“We are also current holders of the Imbokodo women’s sevens tournament, which we host annually. It is now in its third year and we are hoping to attract even more teams this time.

“We came third in the USSA sevens last year, narrowly missing out on making it to the final.

“Recently the ladies played in the Golden Lions sevens tournament in which we came second, but not without a fight.

“The match had to be decided by a golden try, which means the team to score first in extra time wins.” 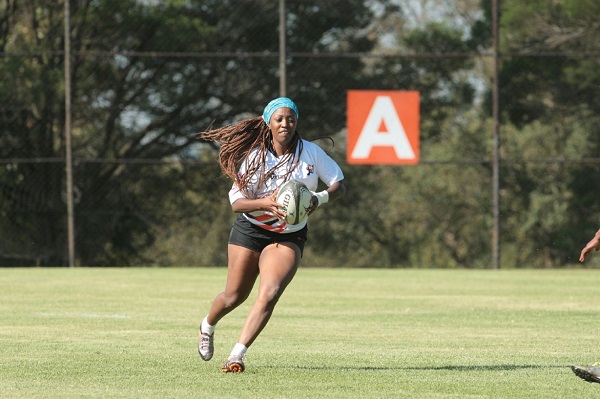 Lesego Malebadi is a member of the University of Johannesburg women’s rugby squad who have had success on a number of fronts in recent years. Photo: Supplied