In an event slightly more compact than usual, SPAR Eastern Cape were still able to make a significant contribution to supporting the environment when they hosted their annual Charity Golf Day in Port Elizabeth last week.

The event took place at the Humewood Golf Course on Thursday and the focus was on the natural environment, with SANCCOB (SA Foundation for the Conservation of Coastal Birds) and Bayworld this year’s beneficiaries.

Both organisations are involved in the protection of the world’s natural resources through the rehabilitation of marine life, tying in with SPAR EC’s vision to reduce the use of plastic in society.

When the final putt had been sunk on Thursday, SPAR EC were able to make a donation of R35 000 to each organisation, a contribution which will go a long way towards helping them achieve their goals.

SPAR EC sponsorships and events manager Alan Stapleton welcomed all the golfers, suppliers and retailers to the day, but reminded them that it was all about supporting a good cause.

“We certainly hope you enjoyed yourself in great weather on a magnificent course, but this day is really about the beneficiaries,” he said.

“It’s a chance to generate funds for people who go out selflessly working for the benefit of the environment, our animals and our natural resources.

“Both SANCCOB and Bayworld do an amazing job looking after our marine life and this goes hand in hand with our Stop Plastic campaign [launched in April last year].”

In the initial phase of the campaign, Stapleton said SPAR EC had sold 3-million fewer plastic bags, which was an excellent start.

“But we need to continue raising awareness about the dangers of single-use plastic in society and we would like all our suppliers and competitors to get on board.

“It is not just about what SPAR EC can do, but what we all can do together – the retailers, suppliers and our competitors.

“We would like to create a wave of measures limiting the use of plastic and I challenge every one of you to go home and think about what you can do about this issue. Even if it is a small thing, it is a step in the right direction.”

Stacey Webb, the Eastern Cape manager of SANCCOB, said they were extremely grateful for SPAR EC’s donation as it cost, on average, R7 000 to rehabilitate a penguin.

“We are a non-profit organisation and have to do a lot of fundraising to cover our costs,” she said. “Sometimes penguins have to stay with us a lot longer than the average six weeks, so that obviously costs a lot more.

“Basically, we rescue and rehabilitate sea birds, getting them healthy enough to swim again and to be able to release them into their natural environment.

“We are also involved in education because a lot of the problems for sea birds stem from the pollution of our oceans, so we want to educate the next generation to be better than us.”

Bayworld aquarium curator Ruth Wright said most of their rehabilitation work was done with turtles and seals suffering from injuries and diseases.

She explained the harmful effects of plastic pollution to marine life.

“For example, a jellyfish is the best meal ever for a turtle, but in the ocean plastic looks exactly like a jellyfish and that obviously causes a problem.

“We are fully behind SPAR EC’s Stop Plastic campaign because it is critical to reduce the amount of plastic harming our natural resources.

“The money we have received will be used for rehab, vet bills and releasing the animals back into the wild because we don’t believe any of them should be kept in captivity.” 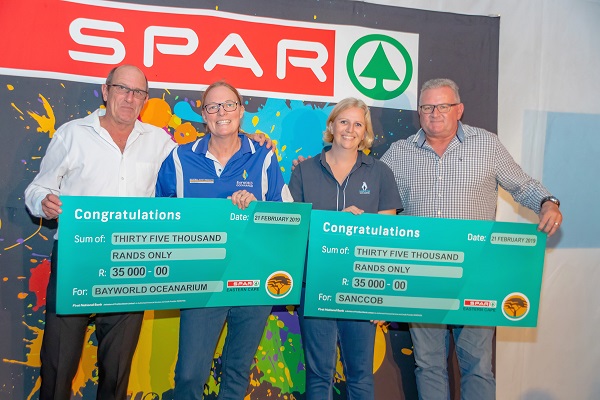