Rugby star Wian Conradie says hard work was the key to success during his five years at the University of Johannesburg after recently being recognised for his dedication on and off the field.

At the varsity’s annual awards gala function in October the 24-year-old Namibian was voted UJ’s student-athlete of the year, while also receiving the silver medal in the sportsman of the year category.

It was the first award which made the final-year quantity surveying student particularly proud.

The criteria for the student-athlete award are a combination of what a student achieves academically and the highest sporting level reached.

The duration of the period is also taken into account as it is the average of the students’ marks during their time at UJ which is considered.

Over four years, excluding 2018, Conradie averaged 79.2% in his course and represented the UJ first rugby team in the Varsity Cup, where they finished third this year.

During this time, he also turned out for Namibia at the 2015 Rugby World Cup.

Although rugby is a big part of his life, Conradie said it was his intention from the outset to make sure “I get something behind my name”.

“I always felt it was essential to get a qualification for the days after rugby and it was quite hard juggling all my commitments,” he said.

“I used to have to go gym in the morning and then spend the day in classes before focusing again on rugby practice in the afternoon.

“And, of course, if you want to get somewhere [in rugby] you have to make sure you perform to make the side.”

He added, though, that he received plenty of support from his mentors at UJ, both academically and on the sports field, which helped him to cope with the load.

“At the end of it all there is a lot of satisfaction at what I have managed to achieve and I am so blessed that it worked out so well.”

Despite being in the running for the student-athlete award in previous years – he received bronze and silver medals in the category – Conradie said it was a big surprise to receive the gold medal.

“To get it in my final year was a real cherry on the top,” he said.

“I wasn’t expecting anything and I said to my girlfriend we must just go to the [awards] function and enjoy the night. Even taking the silver in the sportsman of the year category was a surprise.”

Conradie has left UJ and is now looking ahead to a professional career in rugby. But he looks back on his varsity days with special fondness.

“I started out with the Young Guns and then when I progressed to the Varsity Cup squad it was a major stepping stone,” he said.

“Playing under coach Werner Janse van Rensburg was a great privilege and we worked hard from day one, placing massive focus on our fitness.

“From coming to Johannesburg when I knew absolutely no one to making so many friends means it has been a really special journey for me at UJ.” 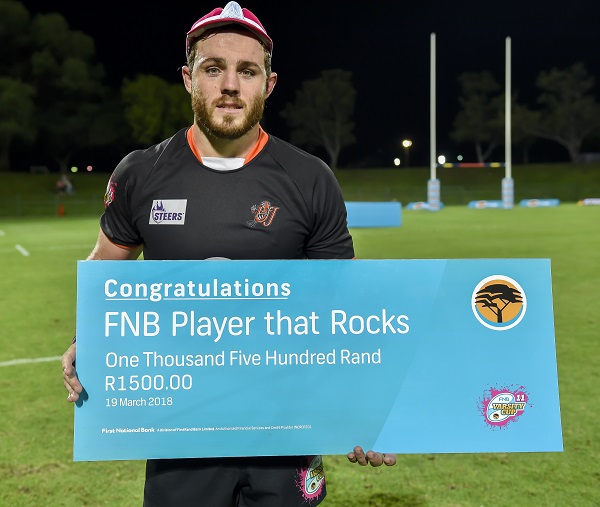